Soeur Holt turned 20 this week. Again, we want to thank everyone who remembered her. She had a wonderful day and although in opening cards from my family and friends there were a few tears, I felt like I was exactly where I was meant to be doing what I was meant to be doing for the entire day- we were teaching and contacting in the heat. I had laid out my presents the night before.

During the night Soeur Atkins had gotten up and stuck posters around the room, super cute. 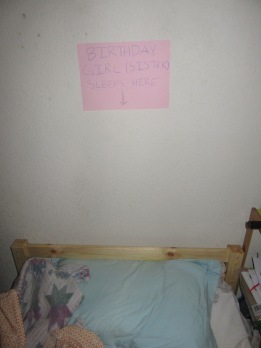 We woke up a little bit early so I had chance to open my presents before heading out for our morning run. 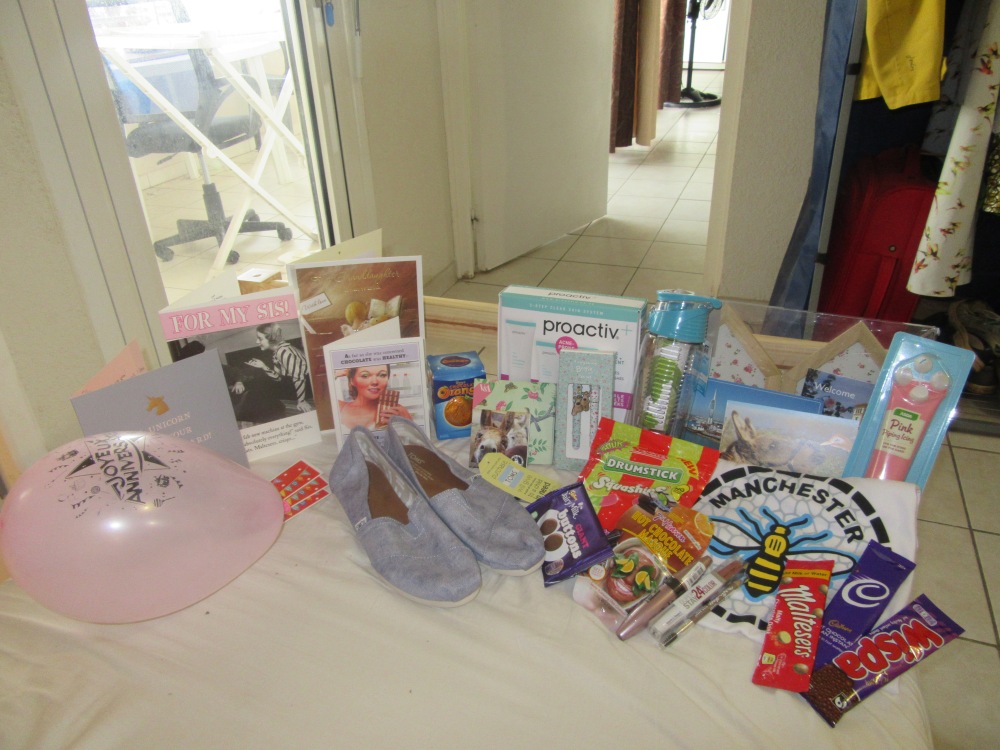 I love the proactive face wash stuff, the toms were much appreciated as well as the Manchester shirt I love it!! 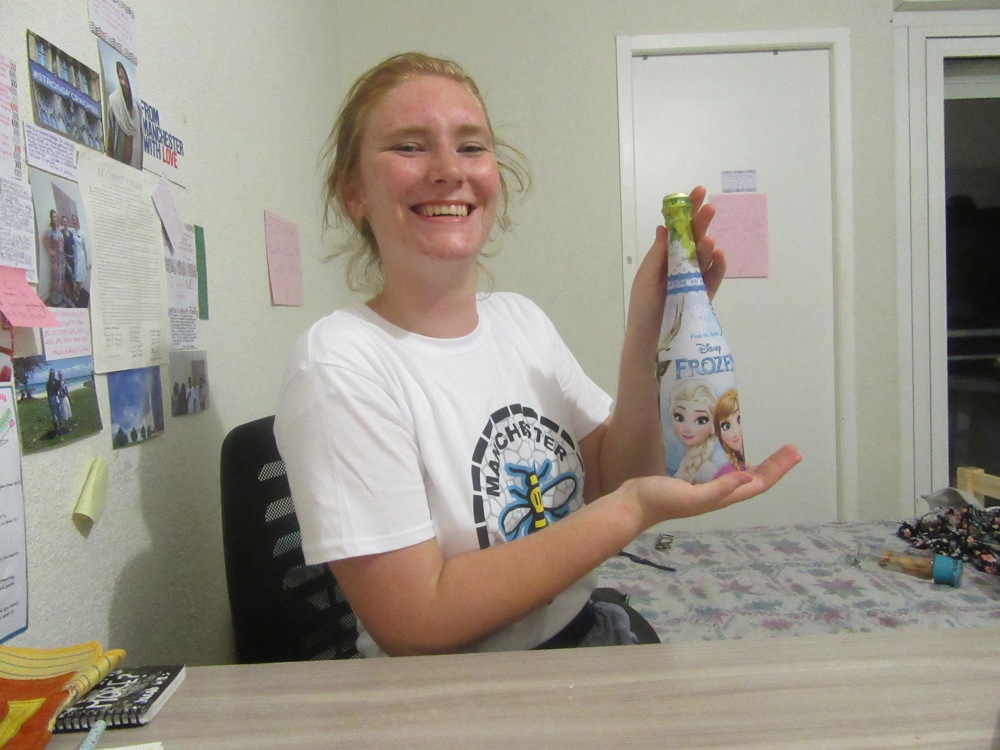 Coordination- the elders surprised me with a cake from a really posh boulangerie called Victor Martin and they all sang for me. 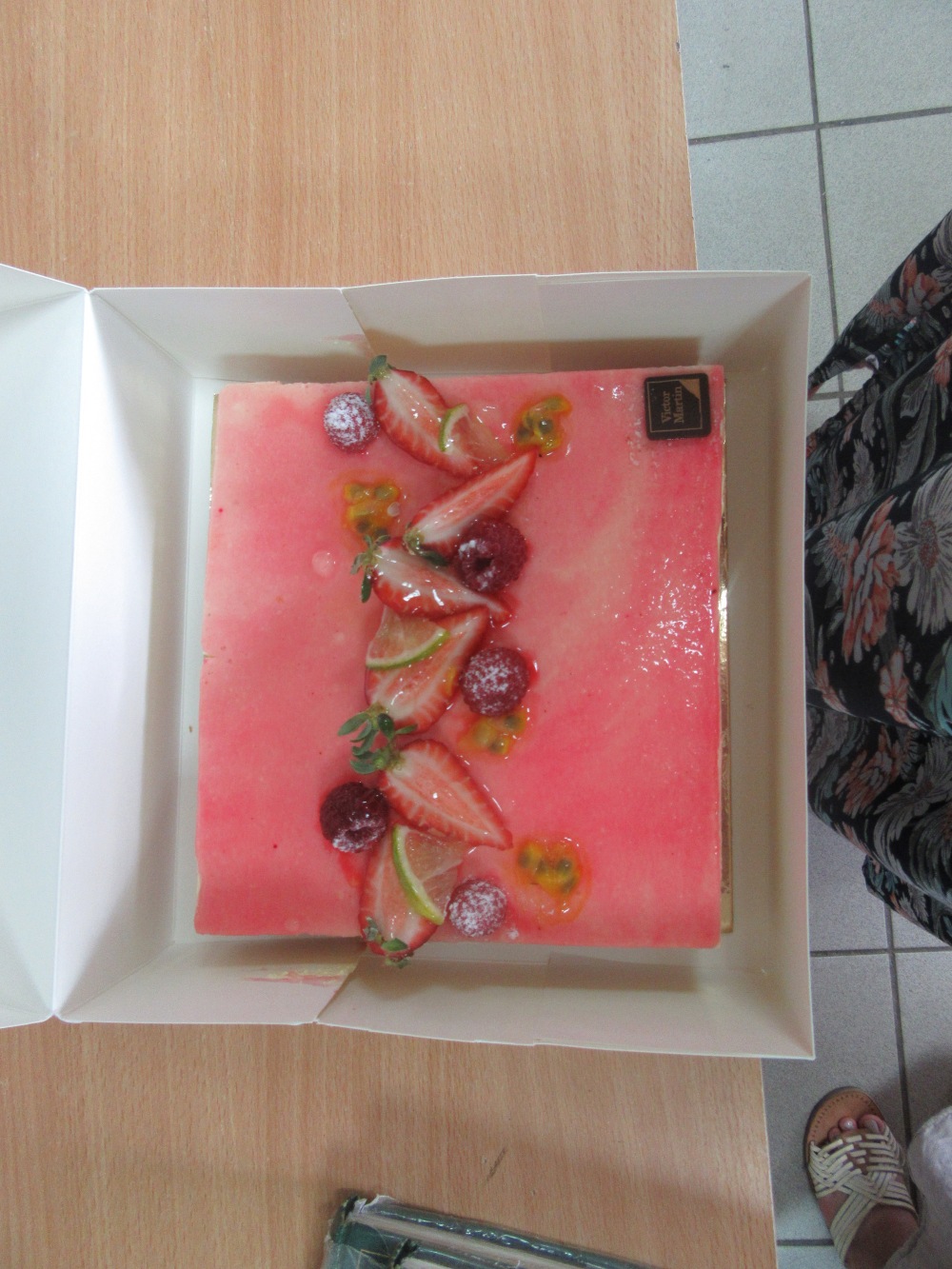 Lunch was at the Moreno home- Soeur Esther had gotten me presents and then we ate African rice and beef before more cake and singing which I hope you can watch on the video. 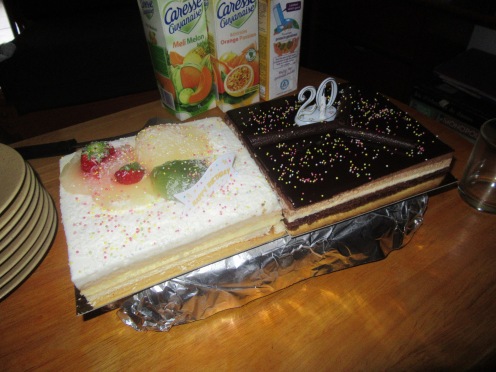 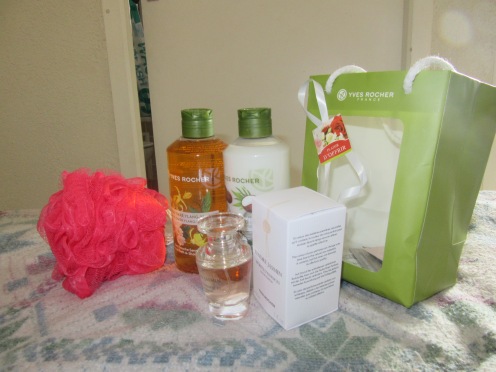 Studies then a visit to John Kelly and Laura who called us specifically to go and visit them and baby Spencer; they gave us more food! By the end I had to explain how I felt like the Vicar of Dibley at Christmas to Soeur Atkins.  After I explained the story she agreed with me!! 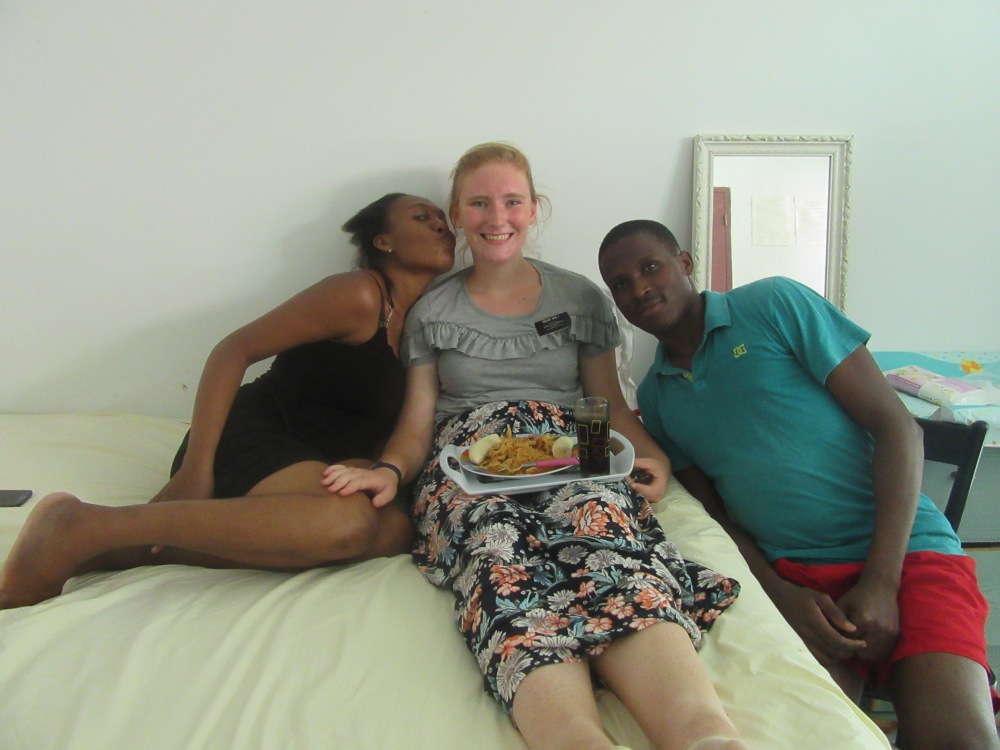 A crazy amazing birthday, with so much love from members and missionaries I can’t express my thankfulness!!

The birthday celebrations had started on Monday however. During emails I received a lot of birthday wishes. We met the Elders at church for a banane pesee birthday party for Elder Madsen, Elder Anderson and I. It was really cool and stress free, we ate banane pesee, a cake that the Elders had bought the mix for – (obviously we all blew out the 20 candles!) and played werewolf.

It also extended to Saturday: Soeur Souverain gave us birthday banane pesee specially made for me!

Soeurs Holt and Atkins seemed to be seeing a lot of success with lots of teaching opportunities. They also have four people preparing for baptism. Even this much into my mission I still have an irrational fear of asking people to set a date for baptism as I want to teach them one more lesson, I want to fast for them one more time …but here are the results when you have faith that the Lord is truly preparing the hearts of those you are teaching.

They taught the young man who came out of hospital this week. We picked up Soeur Esther for a lesson with him, we finished the lesson about the gospel of Jesus Christ and changed his baptismal date to the 25th so we know that he is ready and has received all of the lessons. We committed with him that we would pass by practically daily so that we can complete the lessons with him… Thursday, we taught the start of the plan of salvation with Soeur Mirta. He had me draw out the plan of salvation with the little images in the back of his Book of Mormon so that he can remember it and look back! In the afternoon we taught him rest of the plan of salvation with Soeur Esther, he was so sweet again at the end of the lesson he kept on saying that no other religion had taught him this before given him this knowledge that everything makes sense that this is the truth and he knows it he is truly prepared and he astounds me every time we teach him with his humility and open heart… Friday we went with Soeur Alcide- we taught the start of the restoration but he was still buzzing from the plan of salvation the day before and recounted all of it to Soeur Alcide…

On Sunday after he had been to Church we had one of the most powerful teaching experiences I have ever had. The Sisters talked about the importance of keeping the commandments as a way of expressing our love for the Saviour; sometimes making the change to living the Gospel can be a challenge. Soeur Alcide bore testimony of obedience and my mind was just thinking at any point he was going to say no we were asking too much but he is so humble he told us that he knows it is going to be hard but wants to follow the commandments. We had fasted for him that day… a true miracle, he is a miracle.

We also had a really great lesson with the teenage girls that we have been teaching. We love these girls so much- during the lesson about the gospel of Jesus Christ they expressed a desire to be baptised in December!!

A couple of quick asides: Wednesday morning we got a call during studies that the Elders had left their lights on overnight and needed us to go and jump start them. So off to Remire we went and Soeur Holt learnt how truly easy it is to jump start a car!… In contacting we met a man called Scotland and I have no idea why but I thought it would be funny to contact this man in a Scottish accent speaking English after he had told us his name! Funny, but he was leaving for Martinique the next day and apparently gave us a fake number!!

This transfer I am trying to study and develop the Christlike attribute of humility. Humility is to submit to his will; to be obedient, work hard and serve selflessly. All things that I need to improve on… This was extended by a study of Mosiah 4.11-12; remember your nothingness unworthy creatures, call on the Lord daily and you will grow in knowledge.

Alma 26.12 I AM NOTHING! I am weak; I should therefore boast of God for through Him I can do all things, even accomplish miracles!

I think these scriptures can easily crush even the biggest egos to the ground! I also was impressed by a scripture in D&C 67.10; this is our privilege through our ordination or setting apart to serve as his missionaries we will see God through the veil and know that He is!