The best laid plans and all of that! Sometimes the missionaries have everything in place and a spanner is thrown into the works. This past week it was their pday where they tried to go to a historical site that was supposed to be really cool but was actually closed so I used the mentality that my father raised me with and we went to the closest Catholic Church to have a look round the small grounds and the inside. Many times on days out and holidays I would often stop for a look round an old Church and all the children would come in- they never moaned, but who knew when left to their own devices they would do exactly the same?! 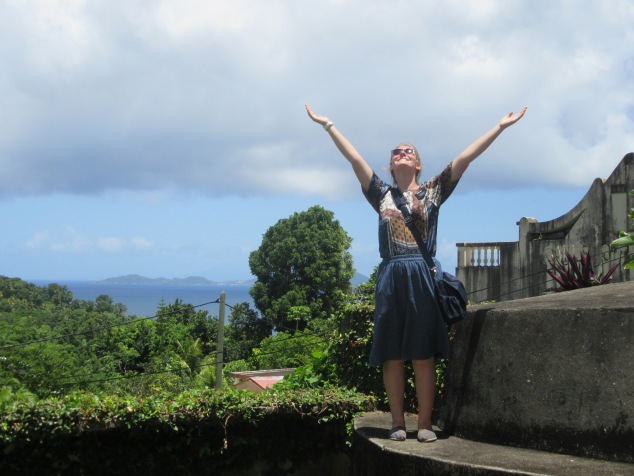 Tuesday was very exciting for Soeur Holt (and Soeur Tepapatahi) as they were able to spend the afternoon working with Soeur Heno. So cool!! We ate in McDonald’s and had our companionship study there with her. During the entire afternoon I loved it; I am always thankful for both of my trainers and the time I had with Soeur Needs and Robinson is invaluable to me, but working with Soeur Heno again made me sad that I didn’t have chance to work more with her. I feel like I had so much to learn that she could have taught me.

As well as the study, they were able to visit with some people. We saw Soeur Blonbou and taught her about the need to act on our desires to follow God and recapped the lesson on prayer that we had with her last week. We talked about the importance to make goals and hope to fix a realistic date in the future for her baptism this week.

Soeur Heno left us later and we caught a bus to Moule where we had another FHE with the Gradel family – an older couple. Because we had underestimated the distance we didn’t have the time we would have liked to stay with them but we did the paper cross challenge that is daddy’s favourite [it’s really hard to explain- but essentially you can fold a piece of paper as many times as you like but you can only tear it once all the way through- one of the pieces left over should be a complete/solid cross. You can then use all the pieces to tell the story of Jesus’ crucifixion] and shared Alma 7.12-14 about the atonement and always remembering him.

Soeur Gradel had made a chicken and vegetable soup, then a columbo which is chicken curry and then an amazing fruit salad for dessert. She took us home in her Mercedes!! Tuesday sounds like a wonderful day!

The most exciting part of the week’s work for Soeurs Holt and Tepapatahi was Friday morning when we walked to see someone we had been teaching who wasn’t in- only to meet a lovely lady who straight off the bat asked us if we pray with people. We said yes you could say that! She gave us her exact address and phone number with a return appointment for the next day!! Before that appointment we had started our fast then we had the lesson where the lady told us that she wants to follow our religion now and she would like to be baptised!! She was also at Church the next day.

On Sunday we finished our fast as a zone and so we had to wait for the other missionaries to arrive to drink!! Soeur Holt sent us some pictures that highlighted the experience of fasting in the Caribbean: 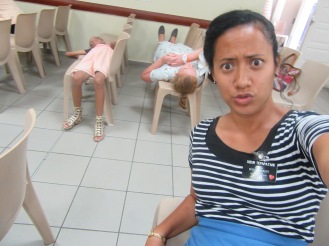 On Saturday night the Sisters received their transfer calls, it means that Soeur Holt is on the move while Soeur T stays in Abymes. As a result of knowing on the Saturday night she tells us that Sunday was good- it meant that i had chance to tell all the members that I will be leaving  and we had had two of our friends, including Danielle, at church. As to where she is going… keep an eye out for another blog post in the next couple of days!!!!