Last Tuesday Soeur Holt marked the day that she has been on her mission for six months (including the MTC): That evening, as I hope you will be able to see from a picture, we had a borsin and baguette supper during language study and celebrated my 6 month mark. Although it seems like such a long time since we’ve seen her, it has also flown by.

Each week the missionaries host an English class at the church. This can be a bit hit and miss, but this week it seemed to go well: Our English class this week was a hit- the Bordin family, Alfred, Robert and another of our friends, Jean Sebastian- the Elders and I taught and it was really entertaining as well as useful.

One of the things that we pick up from Soeur Holt’s emails is that whilst the Sisters are working hard, speaking and helping as many people as they can, the individuals they are teaching changes somewhat each week. Soeur Holt is always so positive, but it was nice to hear of some encouragement and experiences this week that seemed to help her.

During my exchange with Soeur Needs we talked a little bit about how over the past few weeks the work in Abymes has been slightly difficult with the heat and all of our efforts seeming not to correlate with visible results of work. She shared with me Romans 8.18:

“For I reckon that the sufferings of this present time are not worthy to be compared with the glory which shall be revealed in us.”

Our adversity and self-sacrifice now, is not worthy to be compared with the glory that we will receive- miracles are just around the corner here in Abymes. Another scripture that she shared was D&C 123.17

“Therefore, dearly beloved brethren, let us cheerfully do all things that lie in our power; and then may we stand still, with the utmost assurance, to see the salvation of God, and for his arm to be revealed.”

We need to cheerfully do all that is within our power and then when we stand still or rest we know with a surety that ultimately we will receive salvation, but immediately we can see the Lord’s hand in our lives, i.e. his miracles.

A couple of weeks ago Soeurs Holt and Hootini met a lady and her daughter who they taught and they came to Church. Soeurs Holt and Tepapatahi were able to meet with them again this week: We taught them plan of salvation and I don’t know why but we were impressed to talk about the temple but on seeing the picture of the Paris temple she felt as though she recognised it. She has a lot of questions about the spirit world and the spirits of our loved ones being able to come and visit us so we told her we would study it out and come back to her. Note: Put simply, the spirit world is the space between death and resurrection where spirits wait and learn prior to judgement.

As suggested earlier Soeur Holt was able to spend time with Soeur Needs, and also with Soeur Hootini as they went on exchanges: we dropped off Soeur T and Soeur Reep in Abymes and then there were three- Soeur Hootini would have usually stayed in Abymes but with her foot she stayed with us in the car. We grabbed lunch at the boulangerie before companion study and going to follow up with some of the sisters’ contacts. We then met with a man who is progressing amazingly who we taught the plan of salvation to. He really understands it and answers questions really briefly but still thoughtfully, he is excited for his baptism on the 10th of June.

Then to one of my favourite members in Baie Mahault, Soeur Wina- we taught her a lesson based on priesthood and auxiliaries and encouraged her to read some of the talks referenced in this month’s Relief Society message. She also complimented me on my French which always puts me in a good mood- she says that it has improved!!

A theme in a lot of the Sisters’ lessons this week seemed to surround the Sabbath day. One such example was with a family whose mum has to stay home with her son- so they discussed how she can sanctify it. Then another member with whom we shared 1 Nephi 3.7 that god gives no commandment save he shall prepare a way to achieve it he is having a lot of trouble with working on Sundays – it gets him down at the moment. This links with one of Soeur Holt’s spiritual insights for this week-I read a talk by Russell M. Nelson called drawing on the power of Jesus Christ into our lives, his last point is reaching out to the Saviour in faith; something that I thought about is that we need to reach out of comfort zones sometimes in order to force ourselves to rely on faith and on our Saviour.

They tried some new ways to talk to people: That evening we decided to buy a pizza and talk to everyone. The people that we talked to didn’t seem super-duper interested in the gospel but we found something effective to do at night and talked and bore testimony of our Saviour- so that’s all that really matters.

A couple of final incidents with Souer Tepapatahi: On Thursday for lunch that day my companion made me a Polynesian specialty raw fish in salt water with layonaise!! I hope you get the picture, she also cooked some fish for me but the raw fish was actually really good and she loved me for even trying it; but the thing that I was most impressed with was that she filleted her own fish!! 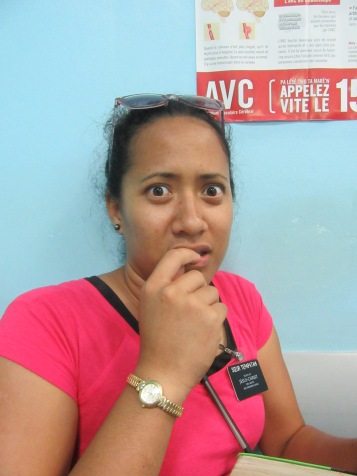 On Friday it was slightly crazy because my companion was in a lot of pain; we went to the drop in clinic. Ultimately after 4 hours there she’d strained something as a result from our walking! It is all sorted now and she is feeling much better. Soeur Holt seems to be wearing her companions out!

Just a final note- last week the internet was slow, so we’ve been able to upload some more photos to last week’s post. 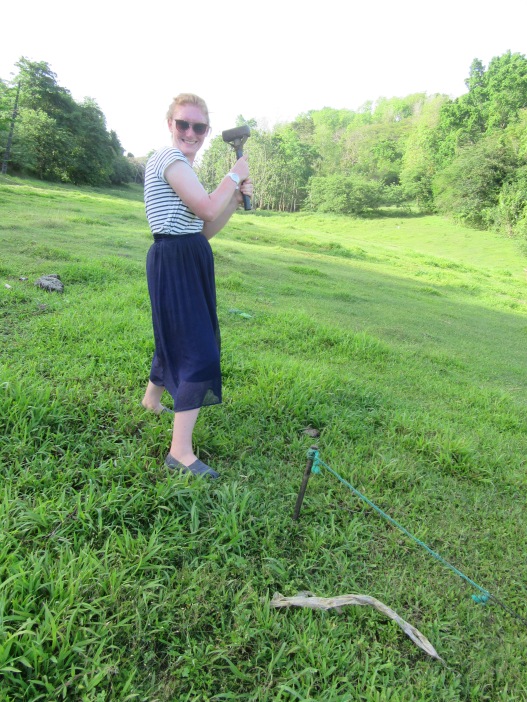