Last we heard Soeur Holt was about to finish her time in a trio and go back to Abymes full time with a new companion, Soeur Hootini. There were still a few days before that happened though and it seems as though a lot was crammed into those couple of days. 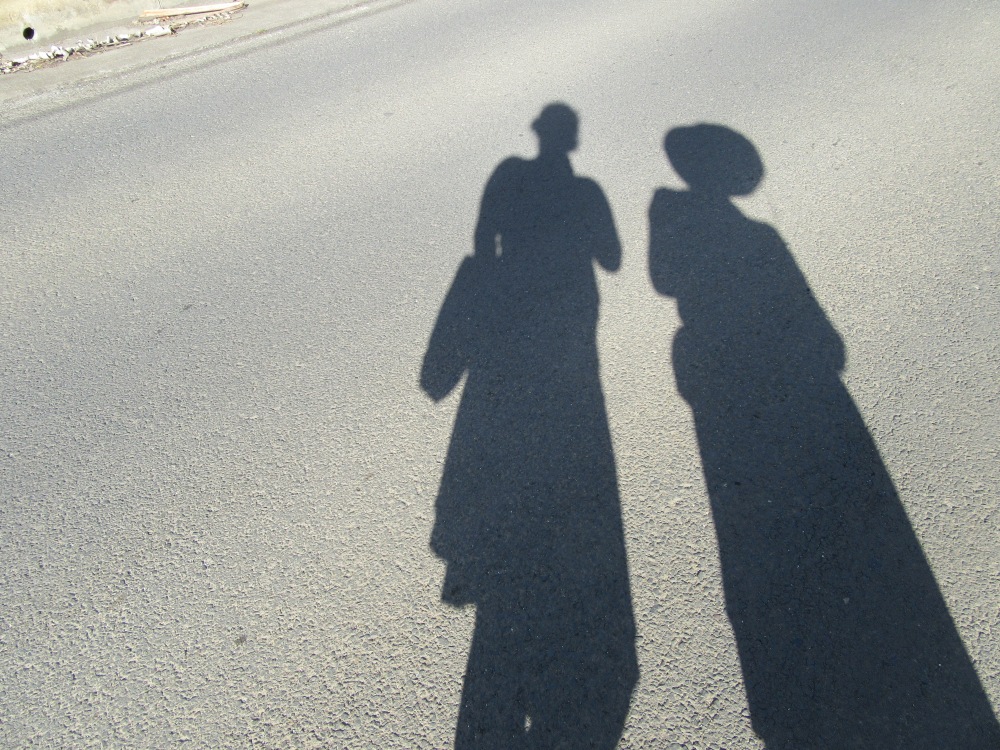 Monday night is always a Family Home Evening. This week they had two!! Our first was at the Gane family but we couldn’t get through to Soeur Gane on her phone to direct us to their home. Finally she answered and we arrived safely but it meant we had to politely be as fast as we could sharing a quick message with them and eating all of the wonderful food that they had put the effort into making for us before running out of the door to the Bordins. The Elders there had already shared the spiritual thought and so we really only had time there to share amazing burgers and laugh a lot!! This might be a theme for this week but I love the abymes members so much!! It really is nice for us to hear how well the members and people of Abymes are taking care of Soeur Holt. There were a couple of things this week that caused Soeur Holt to miss/ be concerned about home a little bit more than usual- and we are so happy and thankful that people were there to support her.

On Wednesday there was a terror attack in London- in my weekly email to Eleanor I had told her that I would be in London on Wednesday. Although missionaries don’t watch television or read newspapers sometimes you can’t avoid seeing newspaper headlines, or hearing about what’s going on in the world. On Wednesday on the way to drop Soeur Robinsion at the airport we got kebabs for lunch and a last hurrah but there I made a fatal mistake of glancing up at the tv and seeing London in a state of craziness; I think I would have been ok if I had not known that daddy was there; I know it was stupid and Soeur Needs told me that I could ring president if I was really that worried) but I knew that apart from Heavenly Father being there to protect you I knew that if anything had happened I would receive a phone call immediately! It’s really strange because while I was on my mission in Scotland a bomb went off in Manchester and I panicked slightly. I knew the chances of it affecting anyone I knew was infinitesimally small but you never know.

On Sunday it was Mothering Sunday here in the UK. We had decided that we would wait until the American Mother’s Day in May for her to Skype (to split the year up better). She had sent a really beautiful letter for her mum to open on Sunday morning. This didn’t take away the fact that we missed her on this special day- Soeur Holt felt the same. I had a low point in Relief Society- I think I was just thinking about Mother’s Day and got myself into thinking about home and so cried. Sr Bouchaut who was teaching came over and held my hand. Afterwards one of the lovely women we are teaching came over to me and gave me a hug and told me about really how much she appreciates me and about her excitement to go with her entire family including her partner to the Paris Temple open house!! Later that afternoon Soeur Gane also phoned me to see if I was ok and talk to me a little bit; her son is on a mission in Brazil; I love these members!!

Moments of homesickness are natural but we are glad for Soeur Holt that they are few and far between. The rest of her week was really positive and a great experience.

Before saying goodbye to Soeur Robinson and Soeur Needs they got a phone call from Barbados telling us that Soeur Reep [Soeur Needs’ new companion] cannot drive and so Soeur Robinson and I would have the task of teaching Soeur needs how to drive a stick shift car in less than 24 hours. We spent the evening in a car park practicing not stalling; all I can say is please pass on my compliments to Dave [her driving instructor]!! Soeur Holt drove again for the first time since her accident: next morning we dropped off Soeur Robinson at the airport to head to Martinique and then I drove us home for studies; it was really weird to just be the two of us. Driving wise it went really well and I don’t think I would be worried about driving again I just dont think I was using my right mirror effectively before but that has been corrected and Soeur needs complimented me on my driving. We spent the rest of the morning trying Soeur Needs back out on the road and driving back to Baie Mahault; honestly it was a miracle she can do it and I told her what Dave told me that number one rule after stalling is don’t stall again.

Soeur Holt’s new companion is is Soeur Hootini- she is Tahitian she loves to dance she loves to eat, she speaks French, Spanish and English, but not Tahitian; she loves to laugh, I love her already!! We are trying to only talk to each other in French and I think that unlike with Soeur Heno I am finally at a stage where that is sustainable and although I can’t communicate everything it helps to think about other ways around to say my point; and obviously if I really can’t- I speak in English and she understands.

Soeur Holt is loving being back in Abymes full time but being back on foot limits the people that you can get to and the number of people who you can see in a day. Honestly its really good and we are really putting a big emphasis on using the members more in our work and finding new people to teach. They also had some really good opportunities to teach this week: We taught Soeur Versailles- it was a beautiful lesson with her discussing her baptismal interview [to make sure she’s happy and prepared for the decision she’s making] and going through the questions with her, and then talking about how to pray and read the scriptures everyday. Other things they taught throughout the week included the Gift of the Holy Ghost; the Bible video from my usb about Jesus healing the blind man;

the Temple; we also visited Soeur Naffer reading from the Gordon B. Hinckley manual; and watching the Bible video on the atonement.

We also taught a family who had automatically invited us in to pray with them last week. I really have a great feeling about them because they told us that after our last visit and during this one they just felt really relaxed and calm and our love for them. The husband said that despite his illness which usually stops him from sleeping he slept soundly after we had prayed with them last week!!

As the missionaries had been in Abymes part time for a while, the other missionaries from the zone came to help find people to teach: Saturday morning we did what was called a blitz where the entire zone came to our area and contacted; it was great fun and we were at the table set up where we had drawn a plan of salvation, it attracted a lot of attention!

As well as study, Soeur Holt had the opportunity to attend a couple of meetings: We attended branch council and it was really great focusing a lot on the Teaching in the Saviour’s Way and how we can implement it. It made me laugh thinking about daddy doing the same things in Hyde ward.

We also went to the chapel to watch half of the General Women’s Conference broadcast before having to leave early to get home in time. It was really weird and I had to stare at my notes page to stop myself from lip reading English rather than trying to listen in French. Whilst I obviously didn’t get everything I got a lot and I guess it means that I really have to listen to the spirit and find to pure doctrine in each talk!

The impact of their teaching was shown at Church on Sunday when one of the people they are teaching bore her testimony on how much she loves the sister missionaries and how much they have helped her in her struggle over the past few weeks with her son being sick; it really lightened my heart and filled me with joy!!

“Yea, and from that time even until now, I have labored without ceasing, that I might bring souls unto repentance; that I might bring them to taste of the exceeding joy of which I did taste; that they might also be born of God, and be filled with the Holy Ghost. Yea, and now behold, O my son, the Lord doth give me exceedingly great joy in the fruit of my labours” (Alma 36.24-25)

If you labour without ceasing to bring souls unto repentance then you can gain exceedingly great joy in the fruit of your work. For the nest six weeks I have chosen to work on the Christlike attribute of diligence- part of that is finding satisfaction and fulfilment in the work; which I think seems to be becoming a theme of my mission knowing that it is pleasing to him!