The big news as we move into the new week is that Soeur Holt is moving back into Abymes full time and will not be splitting her time between the two areas. Ironically this comes as she reports that the headaches have disappeared for the moment and, this week has actually felt like a really successful one when it comes to balancing the two areas. She’s really excited to be able to concentrate all of her efforts there, and as a part of this she will be getting Soeur Hootini as my companion- she is Tahitian and I already love her from the time I spent with her during exchanges last month!!

This week has honestly been jam packed. Teachingwise Family Home Evening was described as ‘different’ but enjoyable with a few members. We were tasked with picking out scriptures on a certain topic and assigning them to teams of two who would then choose a hymn that went along with it and then the entire group would decide what the topic was. It was pretty confusing but good fun with friends  as well as good food! Soeur Holt included a picture with the back of her head in view showing the plaiting skills of the young daughter: 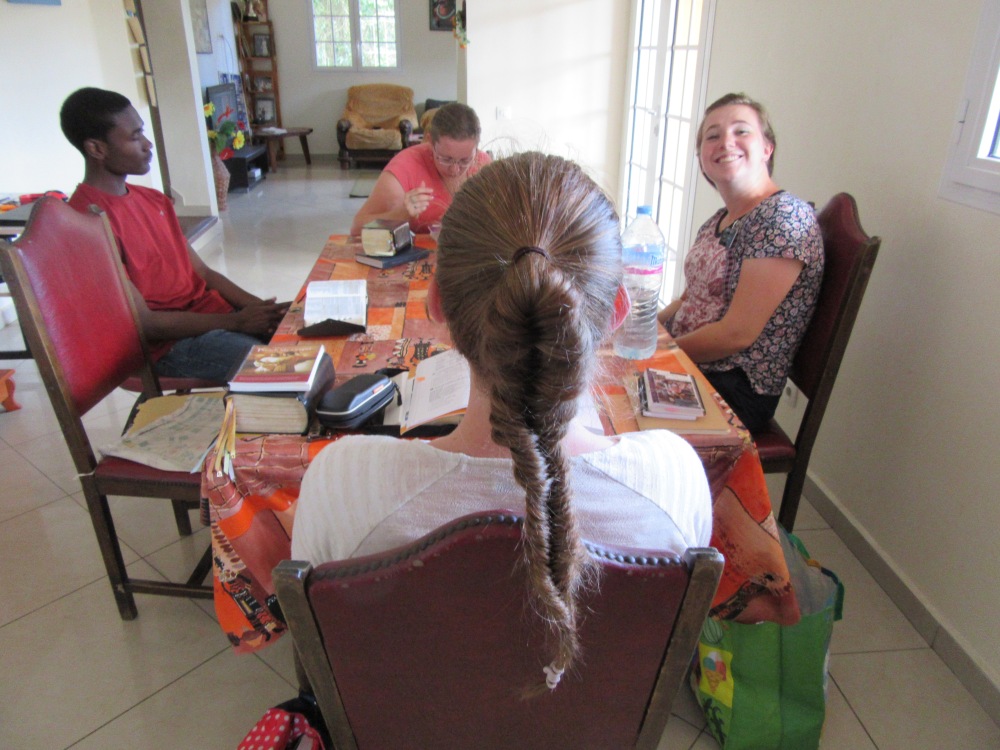 We’ve mentioned before how appointments are not always kept. But on Wednesday Soeur Holt reports That afternoon after studies we had my first day where all of our appointments happened!! They had begun teaching a new lady where they were trying hard to use inspired questions more in our teaching and also really listen to the answers and concerns that people were expressing. The lady had had a hard life and had lost two husbands and her daughter was born with a deformity on her legs so she can’t walk very well, I cant wait to teach her all about the plan of salvation! In the resurrection we believe that all people will be made whole and that families can be together forever. This is a concept that Soeur Holt has been taught all her life; we remember people in our family who have passed on and know that we can be reunited with them.

One member in Guadeloupe has asked to take the lessons from the missionaries again; we taught her the Sabbath day and encouraged her to look at her Sabbath and find something which she can change to make it more about being the Lord’s day. 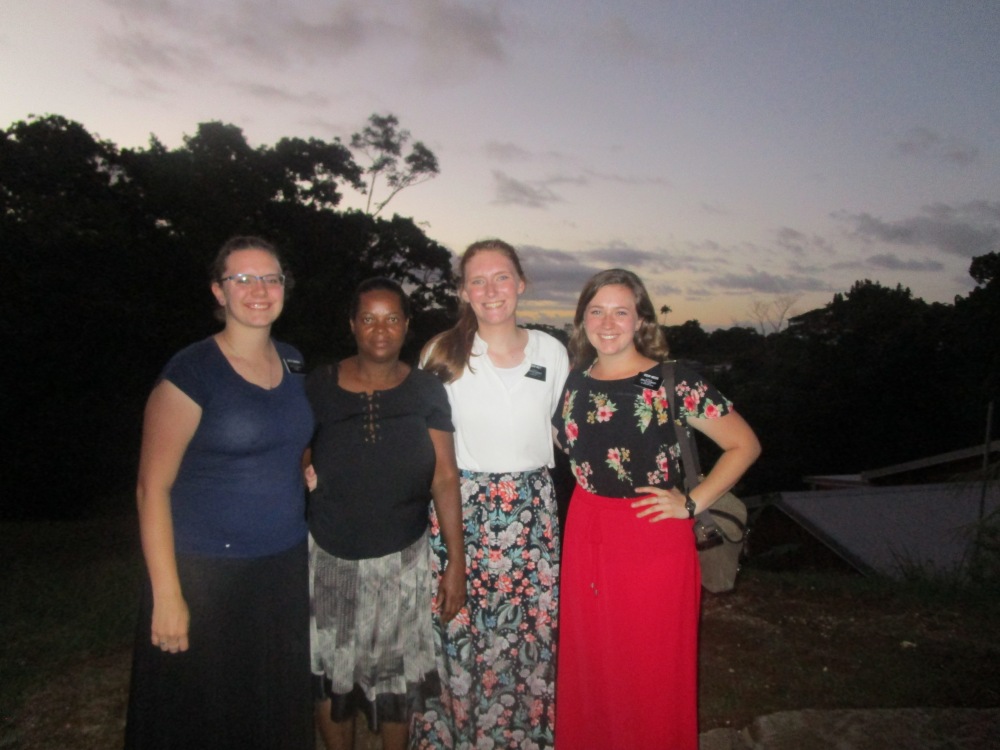 In her last email Soeur Holt briefly mentioned that one of the ladies the sister missionaries are teaching was getting ready for baptism. They had visited her a few times, but not as often as they would have liked. We prayed and got the confirmation that we were rushing things and with General Conference being on the first weekend of April we felt that her new date should be the 8th April. She agreed that the 8th April was better even after going round and telling everyone at church that she is getting baptised on the 25th.

There were so many lessons that the Sisters taught this week- it sounded like wall to wall teaching with a few things in between. Soeur Holt was able to visit with the Nestors and continued to teach them about the plan of salvation; it had been so long but really that entire family fill me with joy!

One picture she sent was lovely- it was of Soeur Needs and Soeur Holt taking ‘pink teddy’ proselyting. Pink teddy is the soft toy that Eleanor has had, and taken on every night away with her, since she was born. She’s a bit worse for wear but Eleanor wouldn’t be without her. Before and after pictures below:

Part of a missionary’s life is seeking for opportunities to serve others- sometimes this is for members of the Church, sometimes for those not of our faith. On Wednesday morning we went and did service for the Area Seventy, Elder Gamiette at his ranch. We looked after the horses a bit Soeur Needs said that she could tell I was English because the horses love me!! We also helped build a bridle path across a river; I guess it will be as close to swimming as I will get! 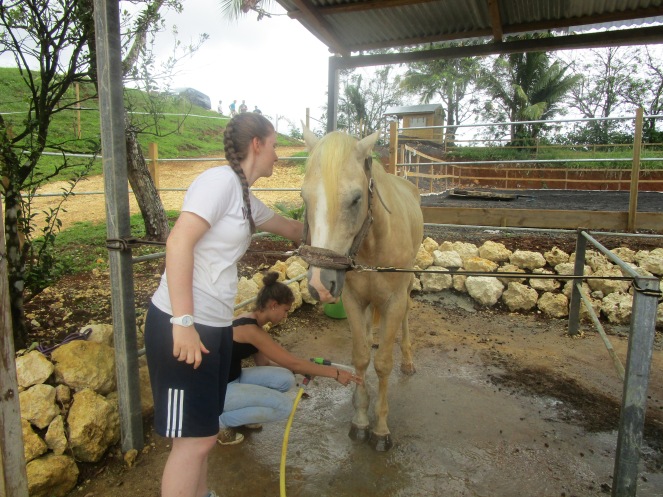 On Saturday it was a hectic day: we poked our heads in at the Relief Society party which takes an entire day here; then sr point du jour for a lesson on missionary work; then the car got serviced at Frere Jomie’s house and we did studies with his children who are both preparing to serve missions; then a member split where I went with Soeur Volet to teach Soeur Naffer and the other 2 went contacting; then investigator sports where no investigators turned up but it was ok because we got coco freeze afterwards which is coconut ice-cream but with nutmeg and cinnamon!!

We had sent Soeur Holt a package about ten days ago which arrived on Friday- there were a few things that she had asked for and a couple of treats.

Things she had asked for: HP Sauce!!!! A USB with various Church videos in French. The Sisters were able to utilise one of these in the weekly English class they teach: With Patricia and Pascal were we watched Paul Sleem’s I’m a Mormon video from my usb to test him on his English! Paul is a friend of ours and was a part of a Church film a few years ago- these were designed to introduce every day members of the Church to the world- we’d included it alongside the Bible Videos and Mormon Messages to show Soeur Holt a friendly face from home.

The sisters loved the chocolate as you would expect! We’d also like to thank the two anonymous people who had sent Soeur Holt packages this week. 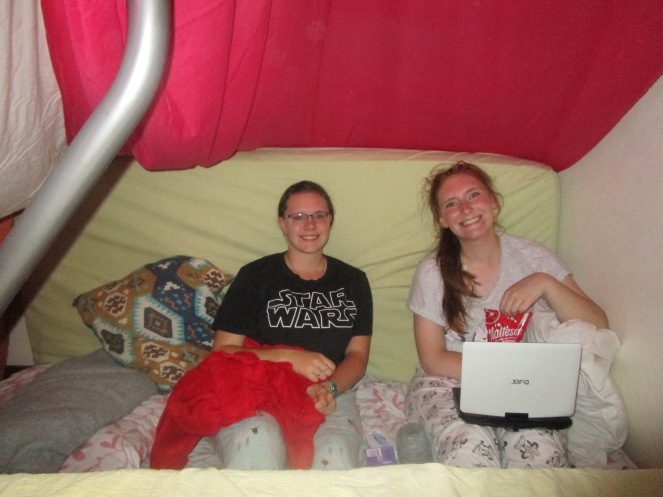 The scripture Soeur Holt highlighted this week is Ezekiel 40:4: I was studying for one of our investigators Veronique in order to teach her a lesson on personal revelation when I came across this scripture. I love thinking about the Holy Ghost telling us both spiritually and intellectually the answers which we need.

“And the man said unto me, Son of man, behold with thine eyes, and hear with thine ears, and set thine heart upon all that I shall shew thee; for to the intent that I might shew them unto thee art thou brought hither: declare all that thou seest to the house of Israel.”

We’ll close with Soeur Holt’s answer to ‘What do you think of your mission so far?’

The best and the most trying part of my life; I have met so many wonderful people that I love so much; I think that it has just given me an insight into how our Heavenly Father looks at us and the amount of stress that all his children must cause him!!

One last thing- moving back to Abymes means that we are returning to the old address for post: