The big news of this week is that Soeur Holt has moved area and has two new companions. Soeur Heno’s knee problems have been slightly worse than we have suggested. This is highlighted by their shopping trip on Wednesday: The sisters then picked us up and we went shopping which was hilarious because Soeur Heno got a wheel chair!! insert picture here!!

and she was just pushed round the supermarket whilst she demanded the purchase of various items. It was also in the supermarket where we received news that Soeur Heno would be travelling to Barbados the next day… She has gone over to Barbados for medical reasons so she is closer to president and I am now covering two areas Baie Maulte and Abymes with Soeur Needs the STL from Michigan and Soeur Robinson from Wyoming. I know another crazy week right!!

Soeur Holt has enjoyed serving with Soeur Heno, and hopes that she will get to serve with her again: some mushy stuff I have loved being Soeur Heno’s companion so so much and it’s not even just that we get on really well and that we laugh a lot, but more than that. I could not have asked for a better trainer to pick me up and compliment me when I am down but also to correct me when I do something wrong…I love and miss her….

As we explore the other events of the week please bear in mind that everything before Thursday was with Soeur Heno, and everything after the is with Soeurs Needs and Robinson.

In studies Soeur Holt was able to attend a zone meeting for all the missionaries in Guadeloupe. It was really cool concentrating on the zone and how we can overcome fears and adversity, it was really quite funny as we shared irrational fears that we each have; they included clowns, maps and planes. After zone meeting we obviously went to the boulangerie for lunch and home for studies. She is learning a lot that she is able to apply in her life and teaching. The things that stand out for her this week included Hebrews 6.19: “Which hope‍ we have as an anchor‍ of the soul, both sure and steadfast, and which entereth into that within the veil.” Just the last part about hope- I have selected that as the Christlike attribute I would like to develop for this transfer. This links with the third chapter of the Gordon B Hinckley manual which I have also loved for that reason. He quotes a man from Deseret News in there about life is like and old time train journey…love it!!

‘I enjoy these words of Jenkins Lloyd Jones which I clipped from a column in the Deseret News‍ some years ago. I pass them on to you. … Said he: “Anyone who imagines that bliss is normal is going to waste a lot of time running around shouting that he has been robbed. “Most putts don’t drop. Most beef is tough. Most children grow up to be just people. Most successful marriages require a high degree of mutual toleration. Most jobs are more often dull than otherwise. … “Life is like an old-time rail journey—delays, sidetracks, smoke, dust, cinders, and jolts, interspersed only occasionally by beautiful vistas and thrilling bursts of speed. “The trick is to thank the Lord for letting you have the ride.” (Deseret News,‍ 12 June 1973.) I repeat, my brothers and sisters, the trick is to thank the Lord for letting you have the ride; and really, isn’t it a wonderful ride? Enjoy it! Laugh about it! Sing about it! Remember the words of the writer of Proverbs: “A merry heart doeth good like a medicine: but a broken spirit drieth the bones.” (Proverbs 17:22.) Let there be something of a light tone in your life. Let there be fun and happiness, a sense of humor, the capacity to laugh occasionally at things that are funny. In all of living have much of fun and laughter. Life is to be enjoyed, not just endured.’

Souer Holt has been able to be involved in the teaching of members and non-members of the ward. They had a Family Home Evening with the Bordons: It was a great family home evening in terms of food and company, the elders also came along… somehow we ran out of time and we could only eat ( barbecued chicken, sausages and cucumber salad) and play with their children!! On Tuesday they taught Fred, who isn’t a member about the necessity of the priesthood power in being able to return to the presence of God. He demanded historical proof of the Book of Mormon with maps and dates and tribes etc. (so we explained that if he really wanted those things then we could find them for him but that really it is of little significance if he received a true testimony as we had that it is the word of God) Then something really random- after explaining to him for the second time that we don’t baptise children he asked us why then circumcise children?? [we don’t]. Anyway we answered all of his questions correctly and really asked him to read the Book of Mormon and pray specifically for an answer about its truthfulness.

Other lessons included a member teaching us about the word of wisdom and the blessings that come from living it, we also had a great discussion with someone not of our faith about the spirit world and the millennium and kingdoms of glory. After Coeurby’s baptism last week we saw the Nestors and we took it quite laid back after the events of the previous weekend and just shared with them a scripture as well as following up with Coeurby about his life as a newly baptised member!!

Soeur Holt’s attendance at Church was unusual. As a missionary she should always be with a companion, but she needed to attend Abymes while Soeurs Needs and Robinson attended Lamentin. I went to abymes by myself and Souer Emma (a young lady going to Tahiti on her mission in a few months) was my companion… It was a really great test of my French but I loved it and a kind sister gave me a lift back up to the others sisters branch after church. 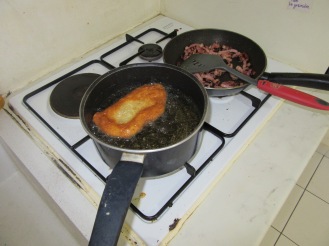 Food made a return this week! Wednesday, The day started off with bread from the bread truck; you know it’s like an ice cream van but in France they sell bread!!! On Wednesday before Soeur Heno left we ordered banane pesee because they don’t eat it in Barbados… We also made our own bokits! 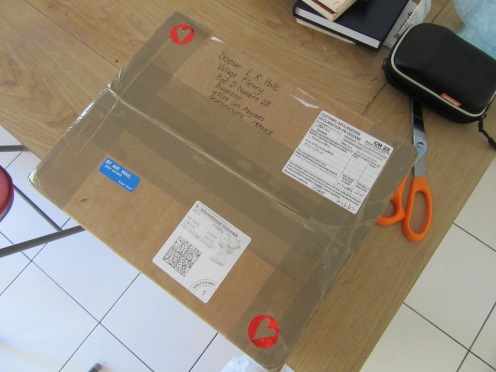 For Valentine’s Day we had sent Soeurs Holt and Heno a package which we were worried wouldn’t arrive on time, or before any possible transfer. On Thursday when we went out to greet the delivery lady I looked into the postbox and my parcel had arrived!! I honestly couldn’t have been more happy, it took 13 days to get here which isnt bad at all; I can honestly say that I had been praying for it to arrive and so that I would be able to share its contents with Soeur Heno and it did on the day that she was leaving!! The internet connection was very slow and unreliable this week so Soeur Holt was only able to upload a couple of photos- for the package we have the packaged up picture but not one of all of the contents.

The last few days are slightly fuzzy so please forgive the scarcity of information…just from craziness… We worked in the sisters area so a lot of the people I met I didn’t know and it was all pretty bizarre. So, yes it was another crazy week in Guadeloupe, I love you all and miss you like crazy!!

So my new address is, actually it’s the zone leaders but our apartment doesn’t have a post box: