It is always ‘slightly’ stressful when the weekly email parents receive begins with: So to start just a quick apology on the subject of how I will be informing you about my week… It has literally been the most horrific and joyous at the same time week of my entire life… therefore I have decided that there is no chance that I will be able to fit all of the information and feelings which I want to communicate with you in just 1 and a half hours of email time, so I have sent you pictures of my journal…. Just know that I am safe loved and after some of the trials that we have faced this week we know of a surety that Heavenly Father loves his children so much and gives us many tender mercies.

All manner of things ran through our mind, especially because the slow internet meant that the photos of the journal took what felt like an eternity to come through before we could read everything that had happened. So that the reader is not panicking- the worst of times was a small car accident on the way to A&E for another Sister missionary. Everyone is fine and all is sorted, but rather than leave you all in suspense it seems more appropriate to mention that at the beginning. Having said that, if it had been any different we would have known about it far sooner than her Monday email as Soeur Holt’s Mission President would have been in contact.

Although there were many other things that happened this week, we will focus this blog post on ‘the best of times’ and ‘the worst of times.’

So, Wednesday, to quote Soeur Heno: “Poop on this day.” Probably the worst day of my mission so far… Then things started to go downhill… we got a phone call from the sisters that we needed to go straight away and pick them up. Soeurs Holt and Heno had the car for the week because Soeur Heno has a sore knee that she needed to rest. One of the other sisters had tried to go up a curb on her bike, and flew over her handlebars. They thought she might have a concussion [spoiler: she’s fine after some rest]. On driving to pick them up we got into my first car accident. We were driving along the main road past a red truck and I knocked off my side mirror on the right as well as his on the left.

This was an honest mistake and an accident, however, we didn’t stop. In hindsight it was literally one of the stupidest and irrational things that I have ever done but we were just so shaken and focussed on getting the others to the hospital. The man drove after us, overtook us and forced us to pull over. Poor Soeur Heno had to handle everything because I was completely in shock. She was literally my hero and he was so angry understandably but he kept asking us for money rather than insurance details.

The next day after contacting President Herrington and the insurance company, Soeur Holt was still very nervous about driving so they arranged an exchange which meant Soeur Heno went to the other area which had a car, and Souer Needs stayed with Soeur Holt to recover from her bike accident: her head neck was really sore and stiff so we also took some time for her to rest (I studied). Later that night, something else crazy happened; the man from the car accident has now decided that he wants to just keep his car and pay for the damage himself, no compensation whatsoever… he just wants us to leave him alone… Honestly I don’t understand, but it’s a miracle:

“Wherefore, ye must press forward with a steadfastness in Christ, having a perfect brightness of hope, and a love of God and of all men. Wherefore, if ye shall press forward, feasting upon the word of Christ, and endure to the end, behold, thus saith the Father: Ye shall have eternal life” (2 Nephi 31:20).

So during planning this morning we rang President Herrington and he told us that we should go back to our companions and get back to work. Soeur Holt is still nervous about driving but she is receiving advice to just get back in the saddle. I (her dad) regaled her with all of the bumps I have had and not to feel too bad as these things happen.

There were many other things that happened this week; including one person they were teaching removing her false teeth to show us; it really freaked me out, and also Soeur Holt experienced her first earthquake. I freaked out and thought it was a volcano or something… Souer Heno and Margarite though I was hilarious because, apparently, small tremors happen often here.

The remainder of this post will be about ‘the best of times’- the baptism of the young man that Soeurs Holt and Heno had been teaching: Honestly if I had to live this week again with all of its trials, I would, just to see Coeurby baptised. Baptism in the Church of Jesus Christ of Latter-day Saints takes place when a person feels ready to accept Jesus Christ and make covenants with him. The minimum age for baptism is 8 years old because we see it as both an expression of faith but also for a remission of sins. Up until this age children are not seen to be accountable and will receive exaltation through the grace of Jesus Christ. Baptism has quite a lot of symbolism associated with it: we are baptised in white (as a symbol of purity) and by full immersion as a symbol of the death and resurrection of Christ, a washing away of sin, and also of the death of the old person and being born again as a ‘new creature’ in Christ. The Doctrine and Covenants tells us:

“The person who is called of God and has authority from Jesus Christ to baptize, shall go down into the water with the person who has presented himself or herself for baptism, and shall say, calling him or her by name: Having been commissioned of Jesus Christ, I baptize you in the name of the Father, and of the Son, and of the Holy Ghost. Amen. Then shall he immerse him or her in the water, and come forth again out of the water” (D&C 20:73–74). 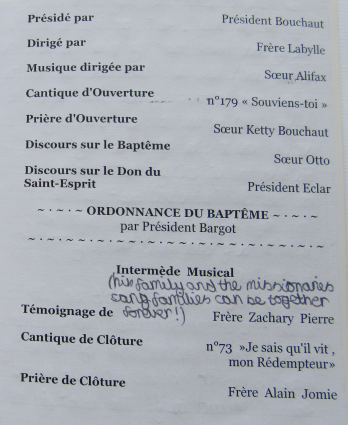 Soeur Holt describes the events: We went to Church to make the baptism programmes and to fill the font. Once there we realised that the chapel needed cleaning so we cleaned and cleaned… He fully understood the magnitude of the covenants he was making on his life, and especially on the life of his family. He has been taught by so many but I am forever grateful to my Heavenly Father for gifting me the opportunity to teach him and be one of the missionaries who see him baptised: what a great end to my first six weeks. 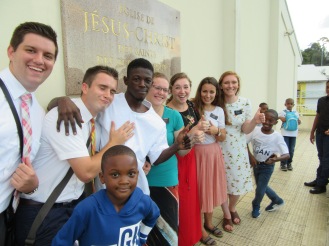 Afterwards, we went and got bokits with the other sisters and Elders in celebration of Coeurby’s baptism!!! The best fattening food on the entire island!

As a second part of baptism, people are confirmed members of the Church and receive the gift of the Holy Ghost by the laying on of hands. A blessing is pronounced on the person. The gift of the Holy Ghost enables people to be guided, comforted, prompted, sanctified and blessed throughout their lives. We recognise it as the greatest gift we can receive in this life.

Dimanche! Church was really great, Ceourby received the gift of the Holy Ghost. He was so spiritual today and told us that he feels like a massive weight has been lifted from his shoulders.

Just to quickly finish with a couple of updates. Firstly about her French: It’s coming and I’m definitely improving I still make mistakes but lots of people seem very impressed with the progress I’m making. And to thank people for the letters, on Saturday I also received two letters, one from Ruthie (I love it) and a crazy cute Valentine’s Card from Hyde Ward Primary [children aged 2-11]; a love heart made up of other love hearts with little notes from each of them- I’m a very lucky missionary! 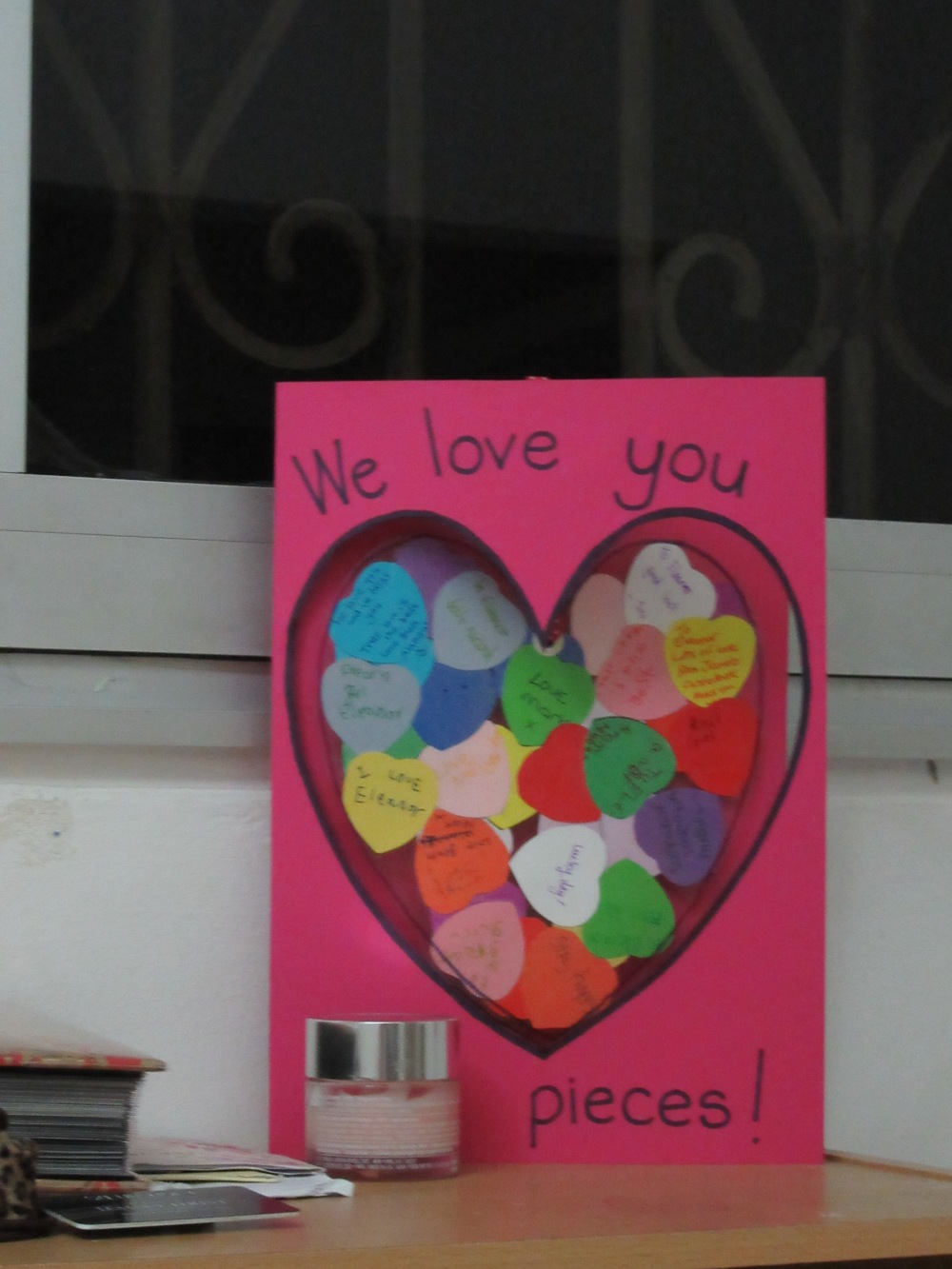