Soeur Holt spoke in her email about feeling as though she is standing on the shoulders of giants. This seemed to permeate most of the experiences that she had throughout the week. During General Conference I loved the remark of our new prophet Russell M Nelson that he feels as though he is standing on the shoulders of giants. I feel like that in so many aspects of my life. I remember in one of my first assemblies in Fairfield [her high school] Mr Headly [the headteacher] spoke to us about this quote which is found on the side of the 2 pound coin. 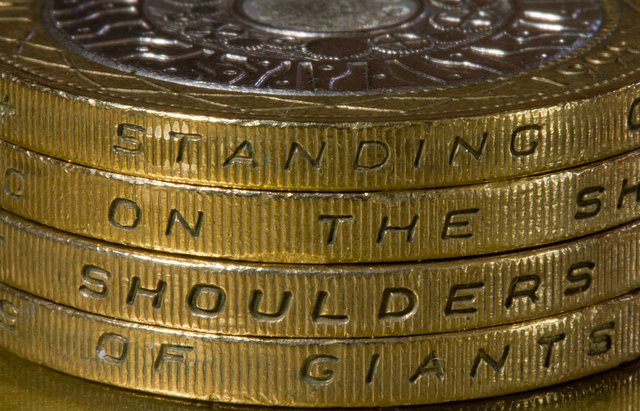 That as Fairfield girls we were part of a legacy. I have already emailed a lot about the sense of duty to my family to my ward to my friends and the motivation that gives me. In this context I am standing on the shoulders of giants of STLs who have gone before me- Soeur Needs, Soeur Hootini, Soeur Moore, and of course Soeur T. The lessons that I learnt from each and every single one of them sustains me as I have this opportunity to serve the sisters. In another perspective the sisters for whom I have responsibility are my giants- throughout this week I had the opportunity to spend time with basically every sister on the French side because of the way that flights worked and I felt their love and their support and their desire to serve the Lord. I love each of them so much and although I feel inadequate to be their “leader” they support and sustain me. 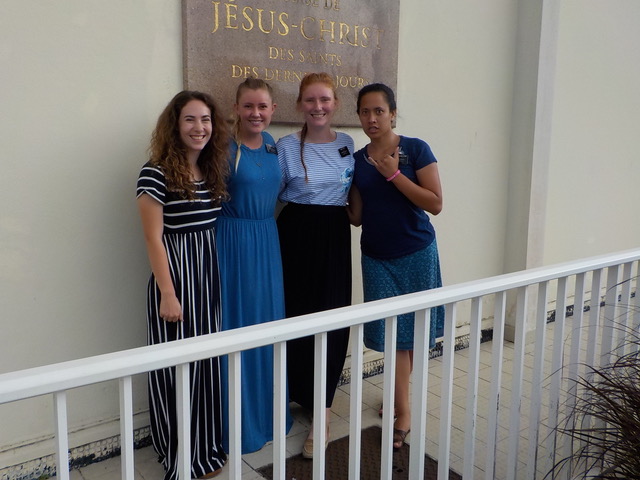 It seems as though Soeur Holt had a lot of running around this week- and last Tuesday was a very emotional and hectic day. I was still with Soeur Atkins and Soeur T in a trio. We spent most of the morning packing for two of us and writing in bye bye journals for one of us before heading out with the luggage in the boot of the car to emails. I was pretty stressed but honestly, looking back now, this week as been one of the most rewarding weeks of my mission. We headed over to the airport to pick up Soeur Hawkins who had to fly in so she wouldn’t be alone in Martinique with Soeur Hootini returning home. Then Soeur T and I headed out on an epic search for a dress that she wanted to wear for arriving home; we searched walked and walked some more before finally we arrived at the first shop that Soeur T had initially judged  to be too expensive to compromise and buy two skirts instead! We ran off to the airport and said our good byes. There was a lot more to that goodbye but we’ll forgive her for not writing more! 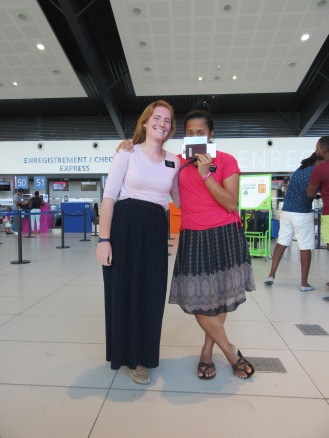 Even though the Sisters were back in a trio (Soeur Atkins, Soeur Hawkins and I) we tried to see a few people that night who were not in, so we went contacting and taught two new people- miracles! The first was a lady, we actually contacted her daughter who was playing in the street and then she invited us back to meet her mum. We shared the Book of Mormon.

The next was a lady who had already met with the Elders in Point a Pitre before she moved to Baie Mahault. We read a scripture from the Book of Mormon about Christ and Soeur Hawkins bore a powerful testimony which meant that lady wants to go and find her Book of Mormon and meet with us.

Wednesday was a calmer day; we went contacting in the morning in Moudong. We met a young lady who sells fruit and vegetables by the side of the road and is searching for peace through the Book of Mormon.

Also Claudia, a single mother, who loves Jesus and is excited to learn more through the Book of Mormon.

We headed over to Abymes for coordination then an appointment with Soeur Bordin where she bought us bokits. The Bordin family from Abymes have reputation for giving a nickname to every sister missionary; and for me it has been an ongoing search- I was carrot top, and English crumpet [we’re glad they didn’t go with that one as it doesn’t translate well] but we have finally decided that I am Fifi Brindacier (French for Pippi Longstockings!).

On Thursday we headed off to the airport. Where I dropped off Soeur Hawkins and Soeur Atkins who are heading off to serve together in Martinique before picking up Soeur Hansen who is finally legal to live in France- yay!!  The flights from Barbados were late so we headed out and I showed Soeur Hansen where a few of the members live in Abymes before a cheeky McDonald’s then back to the airport to pick up the bleus [new missionaries] Soeur Munlin and Soeur Christianson. We grabbed bokits and headed home. I spent the night with Soeur Christianson in Baie Mahault. Really freaky both of them have read literally the entirity of the blog and so basically know my entire life.

Friday- we went contacting again and popped in to say hi to the Desir family before picking up Abymes to go to the Lamentin church for a training meeting which Soeur Christianson and I had to leave early to get to the airport to pick up Soeur Layne and drop off Soeur Christianson who was travelling to Guyane! Back to the church where the other two sisters were waiting for me then a STL training meeting for me before contacting for the evening.

That evening at 1 in the morning my companion Soeur Reep was dropped off by the Laynes after travelling from Guyane.

Saturday- back to work dropped off the other Sisters and went suiviing- that’s when I plaited the mami’s hair.

Sunday- Church went well and studies before contacting and a lesson with lady from earlier in the week- we taught her about the Book of Mormon and she wants to come to church next week.

During my Book of Mormon reading this week the principle of always opening your mouth stood out to me 1 Nephi 20.20, 2 Nephi 1.27- this is a goal for this transfer and I have already been seeing the results. I do not let anyone cross my path without them knowing who I am, my sacred calling and have the opportunity to learn about the restored gospel. To talk to everyone; this still puts fear into my heart sometimes but Soeur Moore had a quote on her wall; she said that fear is the proof that you are doing what you are supposed to be doing, leaping out of your comfort zone.

Coming out of General Conference my thoughts were focused towards the Saviour-  all of the talks spoke about how we can become better disciples of Jesus Christ, acquire Christlike attributes and become more like Him each new day.

On a side note we’re really missing Soeur T as it seems she was the one that took most of the photos!!