Such a busy week for Soeurs Holt and Hansen but it began with a chilled p-day. So last pday was my first without having to rely on other people/sisters for taking me here there and everywhere so we took it really slow and relaxed!! We started out the day by making eggs and hash browns and ate a good breakfast- Soeur Hansen is a breakfast person!! Then into Cayenne for some shopping.  I bought a hammock and the pareo [we think this is similar to a sarong] for Guyane. It is apparently a tradition for all missionaries who serve in Guyane to buy these as souvenirs, we suppose it may make sense for most people but as Soeur Holt says: I’m still thinking how I’m going to use it in rainy Manchester!! Having a car meant that they could then go exploring round Guyane driving along the coast- the sea is brown here because of the Amazon river- we have some absolutely amazing photographs that were taken from the road. 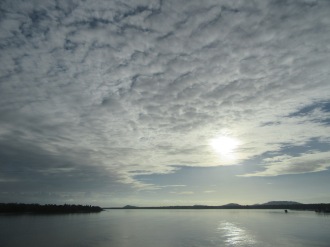 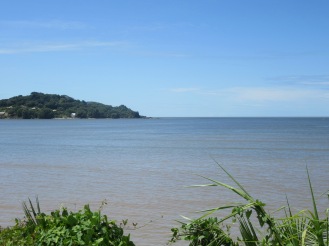 The day seems to have set them up for a much more hectic week. As the title suggests baking seems to have been a big part of it. On Monday before heading out to our FHE we did some baking. On Tuesday we headed out to Sister Baksh’s house to bake a victoria sponge cake!! We had made one for the fhe last night and she wanted to learn how to make it- but obviously we don’t just teach anybody how to make a victoria sandwich, we used Mosiah 18.27-28

We then asked her if she knew anyone who was low in spirit and needed a visit from the sister missionaries with another cake!! She told us about a family that she taught with the sisters 3 years ago that she wanted to visit again…watch this space!!

On Thursday we ate lunch with the Magny family. They are a super amazing older couple from northern France about 10 minutes from Calais; so we spoke a lot about England and the war etc. The visit made me miss the wrinklies next door, specifically granddad who is like Frere Magny with his stories. We also ate amazingly well!! Another victoria sandwich won some hearts!! We feel as though we should point out that the ‘wrinklies’ is an affectionate term for her grandparents who live next door to us!!!

While baking may have endeared the sisters to some, the most thrilling part of their week was the number of people whom they were able to teach. We went out with Soeur Baksh to meet the family that she used to teach with the sisters. Only the mum and children were there but the oldest son said that he loves our church and continues to read every day in the Book of Mormon. The only problem is transport- cue Soeur Baksh who offered a lift for Sunday!! Thursday morning we taught J and his wife with Soeur Esther; we felt awful because Soeur Esther can’t speak English and J can’t speak French but our worries were in vain because she bore powerful testimony about her conversion story and we translated!

Friday morning we had a lesson with a girl that the sisters contacted a few weeks ago. We arrived and her grandma shouted at us asking us if we were Mormons- this is usually the beginning of some antagonistic questions. But she invited us in- miracle she actually has a brother who lives in Washington DC and is a Mormon Bishop! The entire family joined in the lesson grandma, dad, mum, cousin and the young lady!! And then finally on Saturday Soeurs Holt and Hansen taught the tenth person of the week who wanted to learn more about the Saviour; suiviing with a lady who the sisters had contacted months ago but she had an operation so told them to come back after a while. She is from the Dominican Republic (she made me want to learn Spanish! I love her accent in French!!) We taught her about the fact that we have a loving Father in Heaven.

An important part of missionary work is being able to work with the members. Already we have seen how visiting with the Baksh and Magny families helped build relationships and also help the sisters find people to teach. This seemed to be an important part of the week for Soeurs Holt and Hansen. A couple of highlights include at FHE with the Baksh family and Frere Jeffrey. Fr Jeffrey is from English Guiana- he is a leather worker and you can see the scripture cases that I designed and he made for me!! They are amazing!! 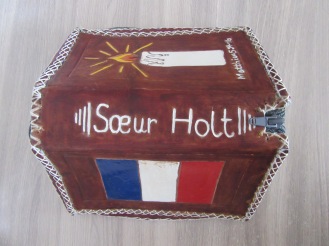 They also remember to thank those who make their service possible: we then went on a cookie run giving to Soeur Gaelle who baby sat for Derlie so she could teach with us and the Moreno family!!

Working with the leaders of the Church is also important: Wednesday morning we had a role play at the Church with the branch president- President Francitte and his wife who is very pregnant!! It was cool because his sister is Soeur Wina from Lamentin and her sister is Soeur Daniella from Abymes, so I had something to build a relationship on!! We role played sharing the restoration brochures…

Soeur Holt continues to be inspired by the people she meets. She spoke so glowingly this week of the example of one lady in the branch and told us that it astonishes me the things she has lived though and the hope that she has specifically in the Gospel of Jesus Christ.

There were so many other members that Soeurs Holt and Hansen were able to spend time with that we don’t have space to list all her experiences. We continue to be grateful for all the love and support people offer to the missionaries and especially Soeur Holt.

We also love to hear compliments paid to Soeur Holt. In her email she mentions two such experience: we then went contacting with Soeur Aimee- she is so cute and makes the joke all the time that I am French because apparently I use French expressions and look like someone from northern France. I’m not sure if she realizes that it’s one of the biggest compliments I have ever been given!! Also, Soeur Hansen made her a surprise whiteboard of ‘Favourite things about Soeur Holt’:

On the first Sunday of every month the Church has a Fast Sunday where members of the congregation share their testimonies, or feelings about the Saviour. We had recently asked Soeur Holt if she had spoken in Church, while getting no answer (!!) she did mention that Church was good-I bore my testimony in the testimony meeting, and we had two friends come to church!! The branch had a meal all together afterwards and we ate well to finish our fast. 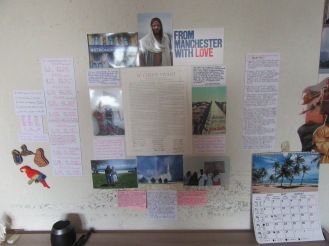