This week President Herrington has invited us to be finding 10 contacts each and every day. This links with the desire of Soeurs Holt and Soeur Tepapatahi to be speaking to everyone they come into contact with. We have really latched onto this and have really been working hard while we walk to take the time to talk more and more to people. It is not as easy as it sounds.. But we definitely see the miracles as we talk to as many people as we come into contact with and invite them to draw closer to the Saviour. As Soeur Holt has focussed on the Saviour in her service and in her teaching she has gained new insights, I found the description of the atonement made in the Garden of Gethsemane in Luke 22.39-44 really powerful and just demonstrates that we learn more about the atonement every single time we open the scriptures.

“And he came out, and went, as he was wont, to the mount of Olives; and his disciples also followed him. And when he was at the place, he said unto them, Pray that ye enter not into temptation. And he was withdrawn from them about a stone’s cast, and kneeled down, and prayed, Saying, Father, if thou be willing, remove this cup from me: nevertheless not my will, but thine, be done. And there appeared an angel unto him from heaven, strengthening him. And being in an agony he prayed more earnestly: and his sweat was as it were great drops of blood falling down to the ground.”

For Latter-day Saints the sacrifice of Jesus Christ is not just focussed around the events of the cross and the tomb, the agony in the Garden of Gethsemane is in concert with the other events and integral to the atonement of Jesus Christ.

This exhibits very much the idea of the love that is shown by Heavenly Father to all of his children. I studied God as our loving Heavenly Father for one of the people we are teaching who is having a hard time believing that there is a loving God and I found 1 Nephi 11.17

“And I said unto him: I know that he loveth his children; nevertheless, I do not know the meaning of all things.”

I love the conviction with which Nephi declares I know that He loves his children and through that knowledge we can find comfort despite not knowing all things. We taught two sister this principle this week- we talked for ages about how Heavenly Father has created all of his children differently but loves every single one.

Soeur Holt also reflected on the benefits of the British education system, particularly Religious Education (the focus of her Dad’s career) I went to Baie Mahault this week because Soeur needs had to go to missionary leadership council which takes like 5 hours and because they are in a trio they wanted to work and leave her there. Neither Soeur Hootini nor Soeur Reep can drive so I went as a driver and drove around working with Soeur Hootini for the morning. We visited the Sesorans- Sister Sesonaran was sick so we shared a scripture with her before leaving and meeting with Sister Eclar to teach someone who, it turned out, wasn’t in. I had a great conversation with a member about her decision to convert from Islam- she is so brave and cool I wish daddy could meet her but she seemed impressed with my knowledge of Islam. So thanks Ms Lealman [her RE teacher] and daddy of course! Here in France it is illegal to talk about religion in a place of work or a school. So different to the culture which I grew up in and I can definitely see the perks of the British way.

Things seemed to be breaking and being fixed this week. On p-day we broke the fridge door off so we had to call the zone leaders who fixed it before breaking it in a worse manner. On returning home on Thursday evening we found our new fridge and installed it before calling it a night! Something that Soeur Holt had not mentioned to us before was a broken sink. An afternoon was spent at the house with the plumber who replaced our sink in the bathroom which has been broken since I started my mission- it was nice to brush my teeth in a sink rather than the bath!!

Teaching and meeting with new people continued apace this week. Monday evening we were supposed to have a Family Home Evening with a family but they cancelled last minute and so Heavenly Father made us prove that we will work no matter what. We contacted and met a nice young man as well as a Dominican man and his daughter. Other things they taught included the importance of church attendance and we are still persevering with getting him to recognise his answers to prayers- the Spirit was really powerful at the end of the lesson as we offered a kneeling prayer together. To another lady we have been teaching for a while we taught the plan of salvation after she had a lot of questions about the resurrection- her daughter was there with her 2 little girls and she was really engaged in the lesson too asking if she could come to the next and maybe we could pass by her house as well!!

Food made a return- but it was all home made! Soeur T cooked lunch after she told me off for always cooking it was a really good Chinese stir-fried vegetables with meat balls and rice. The next food event linked with teaching and service: Friday morning I had made a cake to take to visit a member but he wasn’t there so we saw Soeur Naffer instead and she loved it while insisting that we share it together over the scriptures. We then headed to the church to meet with the nephew of a member- she gave us his number because she says that he is searching. It was a really great first lessoned he really understand the principle of prophets- I am excited to continue teaching him!! 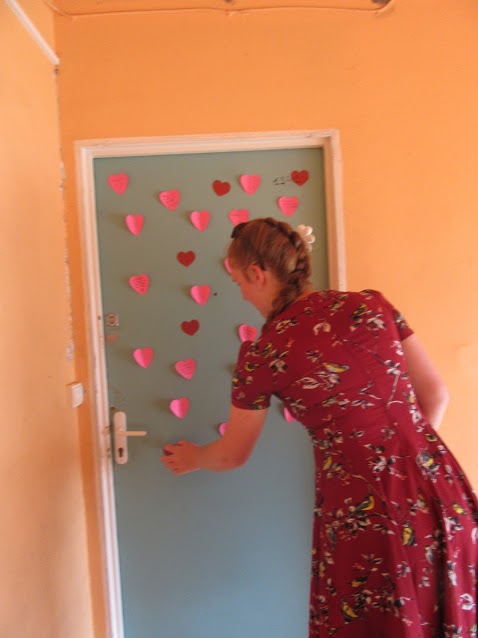 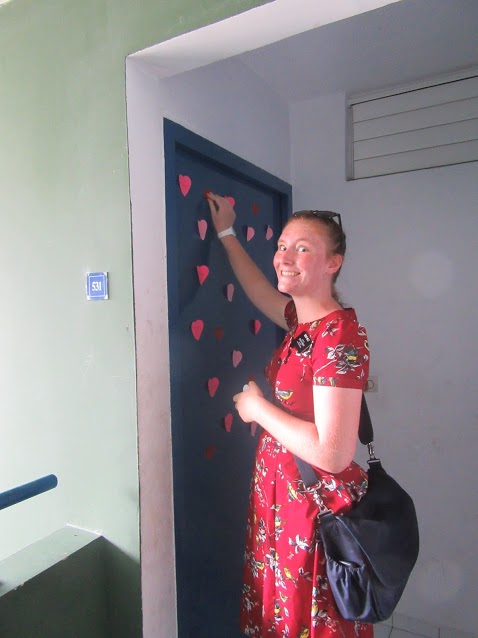 Yesterday we had district meeting and heart attacks for two sisters in the world [Not the cardiac variety- covering their doors with heart shaped messages of appreciation]. They loved it and one of them rang us to say that she had goose bumps and that we had made her week!!

As Soeur Holt continues to serve God continually and always try to be a more consecrated missionary, we reflect on all of the relationships she has built up over the last six months. She loves the Abymes branch and all of the members. Next week is transfers and we don’t know whether she’ll be staying or going but it seems to be at the back of her mind: With regards to next week who knows whether I will be packing my bags to leave or not? Transfers are stressful I don’t like change!!