No, it’s nothing like that! On a Monday evening for Family Home Evening the single members of the branch get together. Last week it was at Sister Point du Jour’s home- we played a game where Stracy had to get across the room blind folded with Sister Volet instructing her and the rest of us making lots of noise and distracting her. We used it and Doctrine and Covenants 10:5 to illustrate the principle of prayer.

It was whilst we were eating that Stracy received a skype call from Soeur Heno and I freaked out!!

We made Soeur Holt a little jealous this week because three of us were able to go to the Paris Temple Open House where we met Soeur Heno or rather Sophie now she is home from her mission. She lives about an hour away from Versailles. We also met one of the people Soeur Holt is teaching- Danielle was one of the ladies who comforted her on Mother’s Day in March. 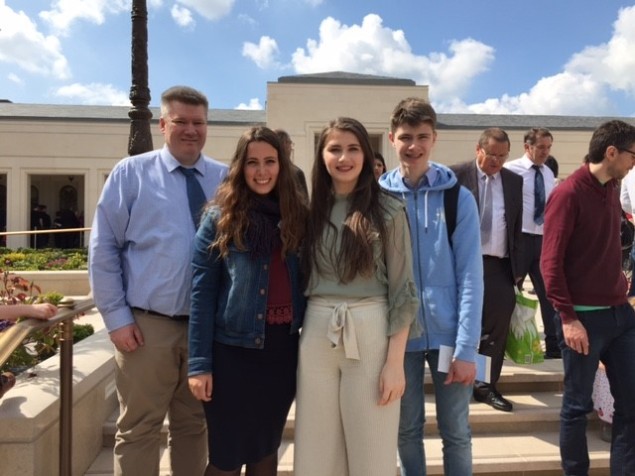 Some things we learned from Danielle and Sophie:

It was amazing to connect with people that love Soeur Holt and have been or are such a blessing to her. They were a pleasure to meet! The way to our heart is through food and Sophie had made us some treats to enjoy on our journey home – Gideon described them as ‘sweet Yorkshire puddings’ – delicious! We told Soeur Holt about our experiences: I’m so glad you had the opportunity to meet Soeur Heno and Danielle- I will see you in a few weeks… We will be Skyping on 14th May- so excited!!!!

This past Monday (it was a public holiday so emails came through on Tuesday), we went to the singles club family home evening at Sister Volet’s where we shared a lesson about scripture study using the game scripture study charades. It was really fun. We used Doctrine and Covenants 11:21 about ‘first seek ye to obtain my word.’

Every week Soeur Holt mentions about the opportunity they have to visit with Sister Naffer who is poorly and can’t come to Church. That evening we visited her and read with her as usual in Gordon B. Hinckley- every time we go she seems to get worse in health but she always brightens my day. She also gave us star fruit from her garden it was my first try and I love it! We received some pictures this week:

Service continued to be a theme of the week’s activities for the Sister missionaries. On Wednesday morning Soeur Hootini received an impression during her personal study that we should go and serve a sister in the branch, so I told her lets got for it. We took appropriate clothing and turned up out of the blue to clean her house. She told us later, after we had really gutted and immaculatised it, that she had prayed for Heavenly Father to send her angels to help her with all the things she had to do that day and then we turned up.

That afternoon we headed to visit the young man at the hospital on the bus with his mum, his brother met us there. As promised we brought him a pizza this time and he loved it!! He is really getting a lot better as well he was making jokes with us about small and fat doctors.

Soeurs Holt and Hootini continue to spend a lot of their time teaching. One such example is where we taught a gentleman at the church with Soeur Volet and taught him the First Vision using the Restoration video.  He was really touched and he had already read Joseph’s testimony in the front of the Book of Mormon and had the great question of what was Joseph’s specific calling as a prophet like Noah was to build an ark and Adam was the first man. We answered and are really excited about him.

Friday was all contacting and trying back with people missionaries used to teach, this was hard work but still full of miracles. Part of me felt like though that every door that we knocked on and they didn’t answer was a person that we hadn’t spoken to on the street over the past couple of weeks. I used to be really good at stopping and talking to everyone with Soeur Heno and Soeur Needs but Soeur Hootini prefers having a door to knock on. It definitely taught me a lesson that I honestly find a lot of satisfaction when I know that I have used every opportunity to share my testimony and it has been a lot better at that over the past few days!

Saturday morning we saw the miracle from our effort yesterday in contacting people who were taught before. We taught a lady a lesson as well as with her 11 year old daughter- they are both amazing and were telling us that they love our church services so much. In the past she had been to a class on Wednesday evening and whilst there remembered the sister missionaries and what they taught- she told us that our doctrines just make sense to her and that she missed meeting with us. It was her birthday and she joked that we were her present from heaven. Sunday was district conference again and they came to church and were really welcomed by the members who remembered them- Soeur Bouchaut and Soeur Otto. It was such a tender mercy and a miracle I am so excited for them!!

Sunday afternoon was fun! We had a lot of time so we took my new conviction to talk to everyone and spoke to everyone which resulted in lots of good contacts with some young people and an invitation to go to church with a lady called Ezra- so we went. It was different and kind of gave me a head ache from the loud prayers but it was an experience.

So many other things happened this week that we can’t cram them all in- even a couple of really intriguing events only get scant mention- a p-day visit to ‘ghetto nandos’; a visit to the Nestors and to give them the gratitude jar and shared the video about telling and showing your love to your family; a wearing out of her favourite shoes; a package from friends and so many other things. 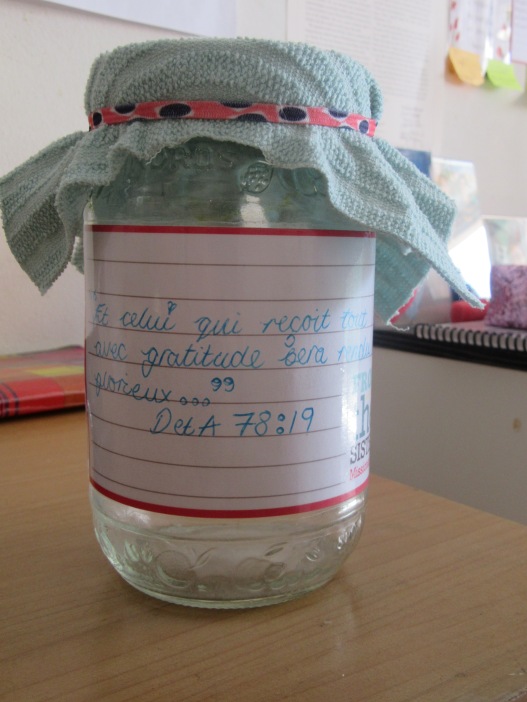 “And now, beloved, marvel not that I tell you these things; for why not speak of the atonement of Christ, and attain to a perfect knowledge of him, as to attain to the knowledge of a resurrection and the world to come?”

This was coupled with Mosiah 3:5-9 in which I loved the simple explanation about the Saviours entire earthly ministry; and also 3 Nephi 17: 15, 17 which explains where Jesus was praying for the people. It really impressed me that Jesus is praying for me. In 3 Nephi 19:25 as well I love the description of Jesus watching over the disciples as they prayed and I love the image of my Saviour watching over me as I pray!

It is lovely to hear of her faith in Jesus Christ, and we are also grateful that He is watching over her every day.

As an afterthought we should mention that Soeur Holt is staying in Abymes with Soeur Hootini for another six weeks at least, which she is very excited for.