Eleanor’s email caught us a little bit by surprise this week as it landed in our inboxes at lunch time. Last week we talked a little bit about Carnival- to us it sounded like a wonderful and vibrant experience. No doubt, it does have that side but in answer to a question about whether she had managed to see any of it, or if members of the Church participated in it, Soeur Holt replied: not really, for some people it is basically an excuse to get drunk and cause havoc, it’s the reason why I am emailing so early from the church today because everywhere is closed down and all the roads are closed off. I haven’t been able to see it but I hope that one day I will be able to maybe come back and see it- it sounds like a massive spectacular!!

Soeur Holt’s email was entitled ‘A lot of meetings and spiritually motivating experiences.’ With regard to the meetings, one of the responsibilities of a Sister Training Leader is to be part of a Mission Leadership Council, so Wednesday morning Soeur Needs had MLC, I sat in the corner and had a personal study within which I devoured the March edition of the Liahona [a Church magazine- in the UK it’s called the Ensign], I especially loved a talk by Quentin L. Cook of the Quorum of the Twelve called ‘The Gospel and the Good Life’ especially his story about eulogy virtues vs. resume virtues- it made me think about what qualities am I striving to achieve now and what are my priorities?

‘Some challenges are not just about good and evil. Some require us to make choices based on what is best, not just what is good. David Brooks, in an editorial titled “The Moral Bucket List,” developed the concept that there are “two sets of virtues, the résumé virtues and the eulogy virtues. The résumé virtues are the skills you bring to the marketplace. The eulogy virtues are the ones that are talked about at your funeral.”’ (Quentin L. Cook).

A few weeks ago we talked about a Zone Conference– this week saw another one of those take place. This one was with Elder and Sister Gonzalez of the Seventy, they were actually in Martinique with all the missionaries there and President and Sister Herrington- so we, in Guadeloupe, and the missionaries in French Guiana skyped in. It was a really great spiritual meeting concentrating on a new approach in missionary work and a focus of the Book of Mormon! 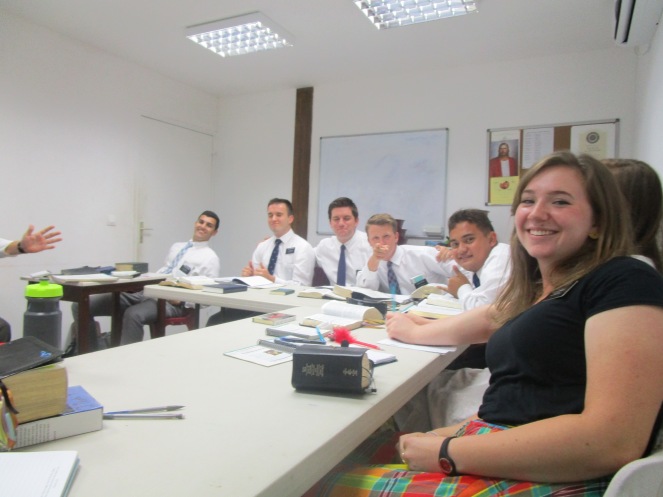 Later in the week we got a call from the zone leaders that Elder Gonzalez was waiting for us in the Abymes chapel so we raced over there.

The Sisters continue to work hard, visit people and teach the Gospel of Jesus Christ. On Monday we went to the Desir’s home for a Family Home Evening, they are a sweet older couple. Soeur Desir made us some homemade passionfruit juice which was to die for as well as my favourite banane pezee. We got some photos of the fabled banane pezee this week: 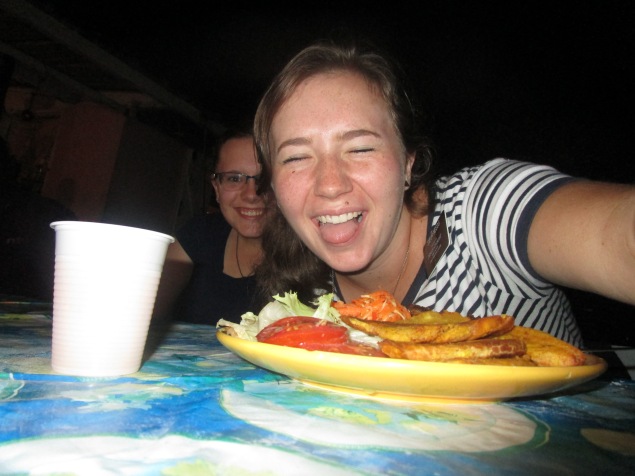 We met with two Haitian sisters and we had a short lesson with them about our loving Heavenly Father, but despite our concern that they would be like most Haitian ladies and talk for England or Haiti they seemed really engaged in our lesson. On Tuesday we contacted a lot of people that day even if it was in the rain- see the photo of me using my coat for the first time in the Caribbean and we had lots of fun doing it together with lots of hilariousness which probably wouldn’t communicate over email but I will tell you one day…

That evening of course was the Nestors and another one of their sons joined us!! We taught the plan of salvation because we feel like eternal families is a massive motivation for the entire family, especially the sons.

Thursday afternoon we spent an hour searching for the Felicite’s home because an exact address doesn’t exist here you just get vague directions and have to go with it. On arrival Soeur Felicite was ill in bed, she said that she was just tired and had a bad back and on bed rest!! We were able to help her slightly by cleaning her home and sharing a short message with her about missionary work. It is lovely to hear of the service that Soeurs Holt, Needs and Robinson are able to give. Saturday morning we went to a home and at first the lady said we couldn’t come in because her home was so messy but she was so humble and allowed us to clean with her.

Friday morning we started teaching someone we had recently met, she seemed really engaged in the message about the Book of Mormon- she is excited to find a religion for herself. She is going on holiday to France for 3 weeks but said that she would phone us whilst she was there with any questions whilst she reads the Book of Mormon (which she is taking with her to read).

Food is an ever present theme- Soeur Needs made her famous quiche for lunch which is amazing- we are starting to cook more together and it’s much better at filling my constant need for food!!… For lunch [on Thursday] I made everyone pesto pasta and they of course loved it!! I think it still is one of my favourite meals obviously after mummy’s Sunday roast. Also, I would kill for a sausage butty with HP sauce!! You can take the girl out of Manchester, but not Manchester out of the girl.

Wards and branches of the Church often have activities that help people come together and build friendships. On Friday there was a talent show at the Lamentin branch, it was so good, they are all so talented and there was so may talents. Sister Desir showed off her cakes (she’s a baker), blankets, knitting, singing, dancing…we had to race home at the end though so that we wouldn’t be late.

Again, on Sunday Soeur Holt attended Abymes branch with Sister Point du Jour- I love her so much she’s like an aunty to me.

Some sad news is that Soeur Holt received word this week that Soeur Heno is going home this week- to rest and get some prolonged treatment for her knee problems. She’s served for nearly a year and this will be for the best- Soeur Holt will miss her tremendously- she feels so blessed to have had her as a trainer.

To conclude Soeur Holt’s favourite scripture this week is Alma 56.47:

“Now they never had fought, yet they did not fear death; and they did think more upon the liberty of their fathers than they did upon their lives; yea, they had been taught by their mothers, that if they did not doubt, God would deliver them.”

Slightly morbid but I had been studying the stripling warriors for someone I am teaching because one of the big motivations for her is knowing that her son is having a good upbringing; but whilst reading that verse it reminded me about uncle Charlie’s postcard and how if we live as our Heavenly Father has taught us to live- in his service etc then we won’t be afraid to die. I was also grateful throughout my reading from that story about your example as parents and I might have teared up slightly… 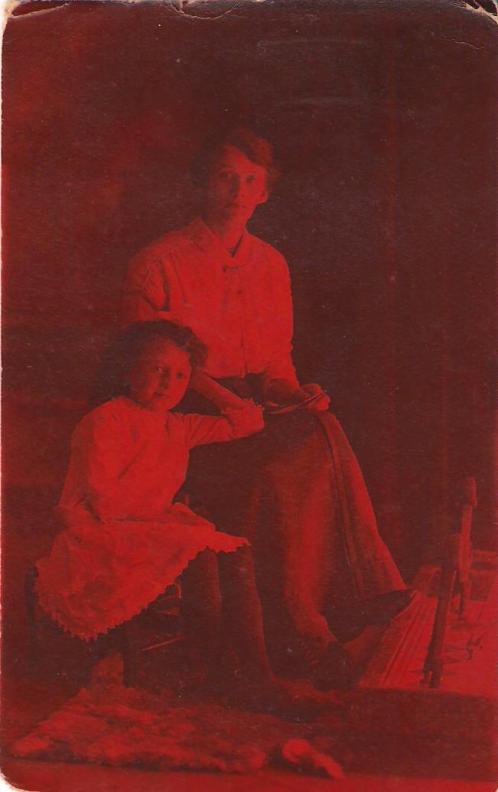 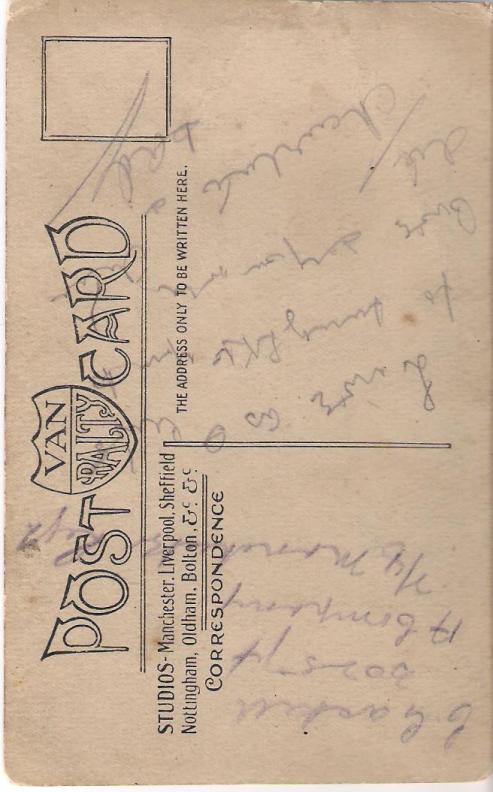 As a little bit of background- Soeur Holt’s Great-great Uncle died in the First World War. As he lay dying, the chaplain who sat with him wrote to his wife about his last moments: “He responded to my prayer and then told me how anxious he was about you and his darling little girl. He made me find his black wallet and then the red photo and give it to him, when he wrote on it a last message for you and handed it to me to send it you with his great strong love. It was dark and I could not make it out so I said to him, ‘What have you written old chap?’ and then he told me that he had written: ‘Tell her to live as I have taught her and then she will not be afraid to die.’ I have tried to do my duty to her and my child and country, I have loved them and tried to do the best for them.” We have all of these letters and photos and they are an integral part of our Remembrance Day each year; we had the opportunity to visit his grave in France when Soeur Holt was younger. 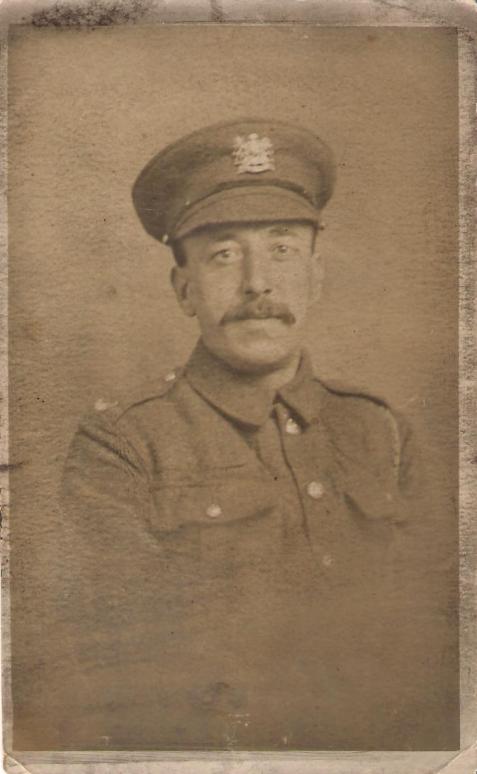 It is lovely to hear that the things that we teach our children have a lasting impact, just as Charlie Gaskell’s last words.