Soeur Holt began her email to us this week telling us about an email that she had received from the missionary who taught and baptised her mum when she was a teenager. We share it here, as it seemed to really have an impact on Soeur Holt and you will see over the course of the week how amazing this is; his email said:

I was blessed to be assigned to Hyde and Glossop as my first area.  My first baptism was a rather shy, but humble and intelligent 16-year-old girl from Denton, by the name of Ruth Wilkinson.  It was clear from the first discussion that the Lord had prepared her for the restored gospel, and more.  Years later, our Heavenly Father would choose this wonderful, faithful daughter of His to be the mother of one of His choice spirit daughters: Eleanor (in Hebrew, Eleanor means “Shining Light”).  May you be that shining light to the people of Guadaloupe, and to those you serve with.

This tied in with some of the lessons that Soeur Holt was learning this week. Every six weeks or so, the missionaries on Guadeloupe get a visit from the mission president, President Herrington and his wife. Although they are in weekly contact, this is an opportunity to catch up in person and also learn together. It is known in missions around the world as a ‘Zone Conference.’ 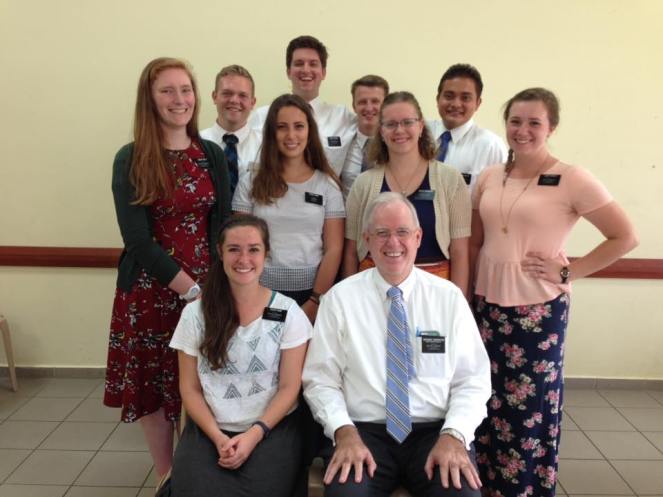 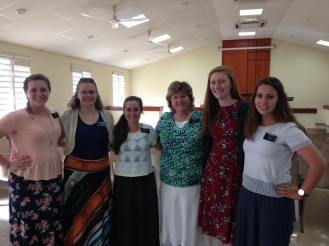 Thursday was zone conference something amazing that stood out was that our mission scripture is Matthew 5:14-16 which talks about more light… It couldn’t

have been more perfect!!!!

Ye are the light‍ of the world. A city that is set on an hill cannot be hid. Neither do men light a candle, and put it under a bushel, but on a candlestick; and it giveth light unto all that are in the house.

Light seemed to be a theme that Soeur Holt kept returning to. She, and Sister Heno, continue to teach and visit with many people who are members of the Church and those who are not. As with all of us, Soeur Holt describes the impact that we can have on other people, especially as she serves as a missionary: it really impressed upon me that I can have an impact on these people’s lives as massive as he [the missionary] did on mummy’s; if I only look for the divine potential in all who I meet. As Latter-day Saints we believe that all people are children of God with huge potential as well as a divine heritage. Soeur Holt recognises that as we recognise that in others we can be more loving, for one of the people she taught this week she recognises the impact the love of the Saviour can have: she needs us and her Saviour more than ever now. One person they visited and taught: I’m so excited for her, she is so lovely and at the end of the lesson she told us that she loved being with us because she could see Christ light shining through us!!! And another lady: it was amazing- that night we received a text thanking us for our visit and that she felt warm and joyful whilst we were with her!!! The spirit!!!

As much as we love Soeur Holt it is amazing for us to hear the influence that she is becoming, and the blessing that she is, to people in the Caribbean. We have always recognised the light within her as a daughter of God, but it seems to be being amplified as she serves as a missionary.

Utilising the Holy Spirit is crucial for individuals, but especially for missionaries. With one of the people they visit Soeurs Heno and Holt discussed how we receive revelation and answers from God through the Holy Ghost using D&C 8:2-3 and Galatians 5:22-23. The young man was really serious with us and described how he has received revelation.

Not everything is quite so rosy… or maybe it is… including her skin! I got my first sunburn this- week it was just me being stupid and I thought why don’t I try one day without suncream and see what happens- it’s not that horrific like London over the summer and is already turning into a tan but I have learnt from my mistake… Oh Eleanor!! Do you not listen to your parents? I guess we all get one mistake. In addition to the sun we’d noticed on our weather app that it seemed to have been raining, we asked her about this: It has rained quite a bit but it’s in five minute spurts, I have sent a picture of the results…. but we soon dry out…. I’m getting used to the heat and Sister Heno laughed because I said I was cold for the first time this week!!!

Members continue to be a huge support to the sister missionaries. On Monday evenings members of the Church try, as far as possible, to have family nights known as Family Home Evenings: Monday night we had a family home evening with the Nestors and the Elders. It was so much fun, we shared a short message using the Mormon Message ‘Because of Him’ and spoke about building a sure foundation in Christ.

Then we played a few games which the Elders had organised, at one point Elder Griffin had to drink vinegar!! We all ate pizza and Elder Ballard’s homemade cookies, which are amazing!!

Not everyone that the Sisters meet are so welcoming, but as parents we are learning that we can’t bubble wrap our children forever. Soeur Holt describes a visit they made as a hard appointment because she talked a lot attacking the cause for which I have sacrificed 18 months of my life, and dedicated my entire life to. By the end we had tried to address all her concerns and left her with our testimony, in response she opened up slightly and told us she remembers having that and misses it.

Soeur Holt is still making progress with her French: Church was slightly different because it was a Caribbean Conference broadcast from Salt Lake; it was good and despite some technical difficulties I managed to pick up on the gist of the talks in French… We asked her a little bit more about how her language was: It’s coming- I can communicate and bear testimony in lessons, I can understand scriptures and ask questions based on things that people say or read. More conversational vocabulary is difficult but we are working on that. Sister Heno and I try to speak French most of the time but it’s actually one of our goals for this week because we get along so well and like to laugh and joke together we often slip into English because its easier. But we are persevering and I can definitely feel myself improving.

Soeur Holt continues to be grateful for all the emails that she receives but seems to be asking for more letters: So please keep the letters coming I love them!!!

So, a crazy jam packed week filled with the light of the gospel and lots of walking and lots of food… Love you all, stay safe and healthy… I pray for all of you every day!!! xxxxx