After arriving in the Caribbean last week it has been a long week waiting for Soeur Holt’s first email from Guadeloupe. The holiday season, and the availability of internet cafes meant that it was delayed until Wednesday. We also have an apology to make as the lack of time and the fact that the French keyboards are strange means that Soeur Holt was only able to email us.

The last we heard from Soeur Holt she had arrived in Barbados and knew that she would be going to Guadeloupe on Friday. In between she was able to work and learn a little bit in Barbados itself. She spent an evening of work with Sister Burghley from Idaho teaching a lady called Alba. On the Thursday the four new missionaries had an orientation meeting. Here, we got a lot of information but basically it got me really motivated and excited to get going. That evening we had an amazing meal at the mission home, it was one of the *Assistants’ birthday so we had cake for pudding.

Food is actually quite a large theme of Soeur Holt’s first week to which we will return!

One of the biggest challenges that we had as Eleanor prepared for her mission was the limiting of her baggage to one 50lb suitcase and a 15lb carry on. The issue still continued as she flew to Guadeloupe via Martinique: I had to check my carry on. We flew to Martinique first and then changed to Air France which has a higher baggage limit!!! The layover was very long…

On arrival in Guadeloupe the baggage claim area is overlooked by a viewing platform so we had a large welcome party, they had posters and cake!!! Soeur Heno is Soeur Holt’s new companion and is from Paris, France.

It actually turned out to be sister Heno’s birthday that day, she joked that I was her birthday present.

We had an amazing small testimony meeting before heading back to the *Sister Training Leaders’ apartment. One of the nice things is that the two Elders from the MTC are on the same island, indeed, Elder Casady is in the same branch.

One of the important part of missionary work is working with local members of the Church. The relationship with members is reciprocal in the sense that missionaries and members strengthen each other. We, as parents, are very grateful for all of the members who love and support our missionaries. We try and support our missionaries as best as we can, and we are heartened to see that members in Guadeloupe feel the same way. We went and taught Sister Naffer who is 93 and so can’t get to church, she was one of the first members on Guadeloupe. We spent the New Year’s Eve evening at President Bucheaut’s house, the branch president [like a Bishop]. His wife served in Temple Square so was able to speak English to Elder Casady and me. After retiring to bed at a normal time, that night we woke up to seen the New Year come in.

Soeur Holt also attended Church for the first time in Guadeloupe: Sunday!!! We had a slightly more leisurely morning and headed to church, the branch is actually the only purpose built church on the island and even has a font!! It was lovely to meet all the members- attendance was about 75 so not that small at all [this is about the same size as Eleanor’s home ward in Hyde]. One of the traditions the world over is that missionaries introduce themselves in the sacrament meeting of Church [the main meeting]. The interesting thing for Soeur Holt is that she’s now in France so I bore my testimony in french and according to Sister Heno it was really good. We asked (again) how her French was holding up in France:  fingers crossed, its coming slowly Sister Heno thinks I’m really good and my comprehension is there but forming something to say back is the hard part but when I do open my mouth apparently it is comprehensible.

This first week for Soeur Holt seems to have been about meeting people and becoming familiar with the area. She was able to teach a number of people, some in French, and some in English. On Saturday we visited a lady who had recently joined the Church. She is from Dominica so we taught her the 10 Commandments in English. After lunch we went with a local member and taught another Dominican man who is a member but struggles to get to Church.

Saturday seems like a very busy day as they were able to teach a man and discuss the divine role of the Book of Mormon. Soeurs Heno and Holt are able to bring comfort to some of the people they meet; describing their meeting with one lady Soeur Holt explained that they were able to discuss the  blessings of Jesus Christ like comfort and strength; she then started to cry because she has been going through some difficult times.

It seems as though they are teaching a lot- sometimes to members of the Church, sometimes to people who are learning more about the Saviour. One final example is their discussion with a man who had recently joined the Church about the law of the fast in preparation for this Sunday and he promised he would do it this Sunday. Though there is also a lot of contacting people, Soeur Holt described during the evening we spent 4 hours speaking with everyone we laid eyes on, it was a worthwhile evening and we accomplished a lot.

Returning to the discussion about food- Soeur Holt described many new foods and experiences this week.

On arrival we went to get the traditional bokit which is like a long baguette sandwich with meat and cheese which is deep fried. It is only found in Guadeloupe and every time a new missionary arrives they are required to eat one. I also tried a drink made out of hibiscus flowers, it’s really tasty and is supposed to be good for you.

That night we had a dinner appointment at Sister Point du jour’s. Elder Ballard and Elder Casady came as well. We had banane pezée, fried green banana with pickled cabbage and carrots, tomatoes and lamb. It was really tasty and super filling.

On Saturday while we were walking back we met a man selling coconuts but he gave us one for free and made a hole to drink out of with his cutlass [!???!?!?!]; it was actually really tasty and refreshing.

It’s good to see that Soeur Holt’s love of food has continued!!!!!!

Missionaries live with their companion 24 hours a day in a house/flat by themselves. We are happy as Soeur Holt describes her flat as really nice and simple and it has a really cool spiral staircase. 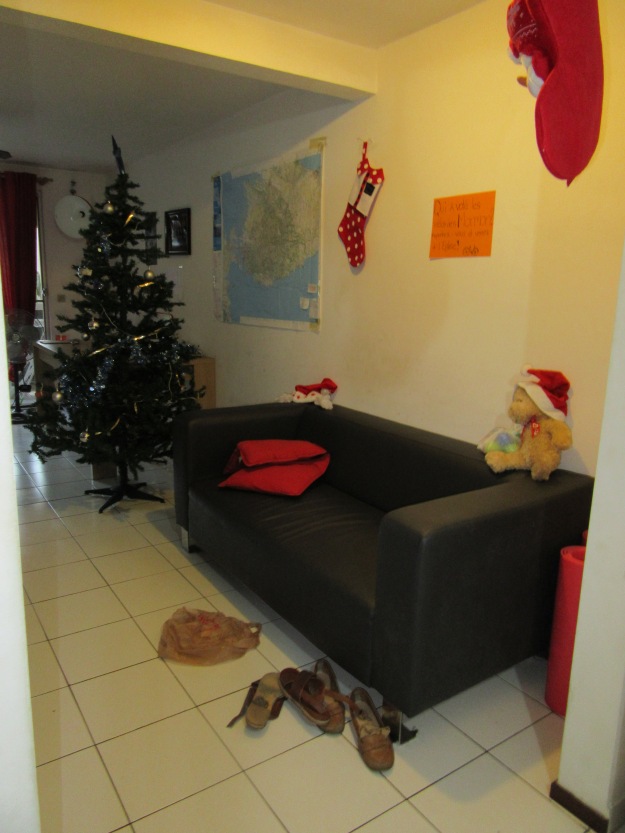 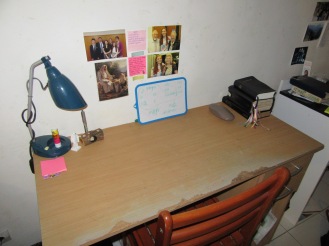 Most importantly, I TRULY LOVE MY COMPANION SHE IS AMAZING  and the *STLs here are also so lovely, I’m surrounded by amazing people. I do miss and love you all!!!!

*Missions have more experienced missionaries serve in leadership roles to assist the mission president. These include Assistants to the President, District Leaders, Zone Leaders and Sister Training Leaders.